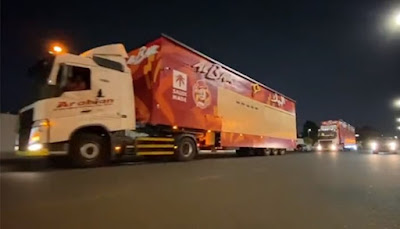 "The first two out of five 'mobile restaurants' are on their way to our sister country, Qatar, to participate in serving our loved ones there during football matches," AlBaik said.

Saudi Arabia's popular broasted chicken brand AlBaik is on its way to the Fifa World Cup in Qatar. In a video posted on its Twitter account, AlBaik showed two of its restaurant trucks travelling to Doha. The restaurant chain said it would have five trucks based in Qatar for the World Cup, which kicks off on November 20 with the hosts playing Ecuador at Al Bayt Stadium. AlBaik, the fast food chain famous for its crispy chicken, opened in the UAE at The Dubai Mall last June, much to the delight of thousands of food fans across the country.

It then opened a pop-up venue at Expo 2020 Dubai and was one of the event's most popular outlets, with long queues outside its doors throughout the duration of the world's fair. The outlet has since reopened at Expo City Dubai, serving up its broasted chicken, which is the chain's most popular dish alongside jumbo shrimp and fish fillet. AlBaik also has outlets in the Mall of the Emirates, City Centre Ajman, Al Majaz Waterfront in Sharjah and City Centre Sharjah. link

The annual car show produced by Q8 Old Car Team is here once again, join us on October 28th from 10am to 10 pm at Marina Crescent. Tons of fun for the whole family! You can follow us on IG @q8oldcar_team