It seems the grant of 1000 KD given to Kuwaiti nationals is causing quite a stir. Ex-spouses are fighting each other over it as the father is the one who receives the grant money even if the mother has custody. My mom tells me it's total chaos all over Kuwait caused by people on shopping sprees. It seems they have emptied out Kuwait of electronics. My mom's hubby was trying to find a computer but was too late. My mom decided to go out in the middle of it to take my nephew shopping, bad idea. She said that there was no parking and it seemed everyone in Kuwait is out.

Her Kuwaiti landlord rolled up in a brand new SUV considering he has 6 kids Mashallah plus his wife and himself, he got a hefty payment. He left the country with his family on their way to Jakarta. My husband went to the bank and had to wait over an hour to get to the teller. Today the atm was out of money and he can't get me any money because the banks are closed until next week which means no Wal-Mart for a few days.

I'm happy they received the grants, but to give it all out at once? Considering it's a national holiday plus everyone has 1000 KD to spend that equals chaos especially when some people act like they never had money before. I doubt anyone used it to pay off the huge amount of debt they have. That can be paid off someday right? Or some are waiting for the day they get their loans paid off by the government. Imagine 3 million KD for spending. When will Kuwait recover from this?

I hope everything calms down by March 7 when I come back. I guess all the stores will be empty, but that's ok I have shopped at Wal-Mart so much that it hurts. I feel sorry for the guy working in the mail room of my hubby's company. He should be ready for the 4 huge boxes on their way and that was just the beginning, I still have another week to shop. Thank goodness for APO.

A Kuwaiti woman filed a case against her former husband who had been allegedly threatening her on phone that he will take the KD 1,000 Amiri allowance which will be granted to his sons. He allegedly claimed that he has the right to do so. The woman added that she has the custody of her children.
Police will summon the former husband."

Will she get the money??
Posted by Crazy in Kuwait 2 comments:

Protesters call for reform in Kuwait

My mom messaged me today about the 1000's of bedoon Arabs in Jahra starting to protest and call for reform in Kuwait. My mom was sent a Warden's message from the U.S. Embassy regarding this issue and warning Americans to stay out of the areas they are protesting in. Now she's all nervous and thinking about storing food. I'm due to come back March 7, what am I coming back to?

The protesters were hit with water cannons and smoke bombs. It figures something like this would happen with the bedoons as they take any chances to gain equality. The ones with proper paperwork eventually gain Kuwait nationality, but those who have come to Kuwait more recently do not have the same chances. I do agree they are mistreated as far as documentation goes. They don't have real passports, birth certificates or even marriage certificates. It's as if they don't really exist. I've worked in Jahra with bedoons and have heard their stories. Their children can't go to public school and private schools are simply too expensive for them considering their salaries are limited to 250 KD or less (the women who worked with us in the school were making 60 KD a month).

I've been told they can't own land, cars, houses or even travel outside of Kuwait unless they are granted permission. This treatment is also given to children of bedoon fathers and Kuwaiti mothers. They are not considered Kuwaiti even though their their mothers are Kuwaiti. The only way a child of a Kuwaiti mother and foreign father can apply for citizenship is if their parents divorce or their father dies which doesn't guarantee them nationality unless they find some Wasta to help. My friend has a Kuwaiti mother and Egyptian father, her parents have since divorced but they aren't considered Kuwaiti even though they have applied years before for nationality.

How bad it must be to be in the country of your mother but not be recognized as an equal. Her family is a well off Kuwaiti family yet she feels as if she is a visitor in her family home. Her sister actually lives and studies in Egypt where her Kuwaiti mother works in the Kuwaiti embassy. Equality is something that really isn't there even amongst Kuwaiti citizens themselves. The wealthy Kuwaitis live a different lifestyle than that of the average hard working Kuwaitis. Foreigners think all Kuwaitis are rich with oil wells behind their houses. Not! There are Super rich and super poor who live day to day not knowing how they will feed their kids. I personally know of a Kuwaiti friend who had 6 kids and couldn't make it with her husband so they divorced so she could receive the payment for divorced women although she was still with her husband. She later found a job and was reunited with her husband.

Click on the link below to read about Kuwait's uprising.

Protesters call for reform in Kuwait - CNN.com
Posted by Crazy in Kuwait 1 comment:

My computer crashed and my recovery cd is in Kuwait and Best Buy wanted 200$ to start fixing it. I decided to get the Sony Vaio after thinking about the cost of fixing my Toshiba. Once again I can get back to my blog. It has been a little slow since leaving Kuwait as Pensacola doesn't have many exciting things to talk about.

Which brings me to the good news. March 7 heading back to Kuwait (Inshallah). I can get back to the issues of Kuwait and bring updated information to people who view my blog. I thank those who continue to visit.

These next weeks are full of moving and getting everything taken care of here so there probably won't be a lot of new articles. If I don't get to writing anything in the next few days then I will bring you the new news when I get to Kuwait!
Posted by Crazy in Kuwait No comments:

This morning I opened up door to find this car had driven off the road and down the hill in front of my apartment. I immediately had the thought that I was in Kuwait. I guess American drivers are just as bad as Kuwait. The difference is in America if it still runs they continue to use the car no matter how bad the damage is. In Kuwait people leave cars on the side of the road with a flat tire or a small dent. I wonder when the tow truck is coming, that should give me something to watch in this boring town. 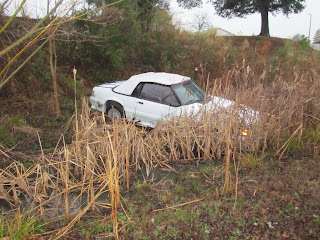 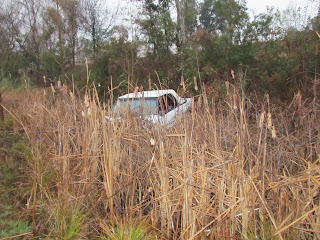 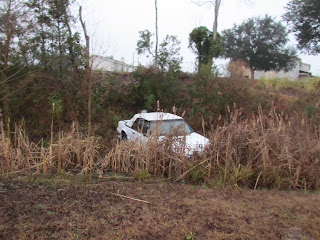 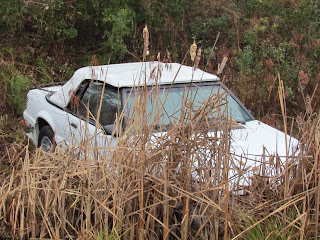 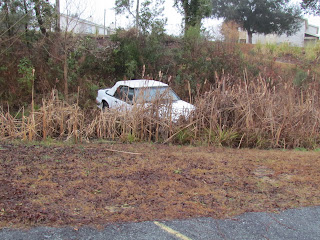 Kuwait is buzzing over the lawsuit against a popular blogger in Kuwait. Mark at 2:48am wrote about his experience at the new Benihana Kuwait at the Avenues. He didn't like the food but gave a good rating to the overall feel of the restaurant. He recommended other Japanese restaurants in the Avenues as opposed to Benihana which upset the sponsor/owner of the Benihana restaurant. Mr. Al-Mutairi the owner filed a lawsuit against the blogger and the trial is set to begin on March 8. If you read the Arab Times daily you will know that rapists and murderers go free all the time. I don't think anyone gets convicted in Kuwait due to wasta. Trust me it's not the lawyers it's all about wasta and of course your nationality. Citizens seem to get off all the time mostly due to lack of evidence or the police not following protocol. The writer of the article is Lebanese which may be one of the reasons they are going after him. I wanted to visit the restaurant but it opened after I left to the states.

In the states the chefs are Japanese and skilled. They give you a show at every meal. The chefs would crack an egg and then flip the egg shells up onto their hat. Way cool. Japanese restaurant with Japanese people in a nice quiet place with light Japanese music. Nice and calming. Fast forward to Kuwait. My mother and her hubby went to Benihana at my request. She said the place was nicely decorated and the people were nice. They had Arabic music playing in a Japanese restaurant. Umm ok. The servers were Philipino and her chef was Indian. She said he didn't really know what he was doing and when she told him about the egg shell flip he decided to try it - with a full egg. Umm clean up on aisle 9. Duh!

Overall my mom wasn't impressed. I would have still visited if the owner didn't make up this suit. Now as a blogger I won't visit once I get back to Kuwait. What the owner doesn't know is that he has brought negative publicity to himself. Yes, people read blogs and take in account the opinions posted but that doesn't mean they would have boycotted his restaurant. People are so uptight in Kuwait and have nothing better to do than sue the little people. He has money to burn via lawsuit and fancy lawyers. Instead why don't you donate that money to orphans or some other charity. Once again a prime example of too much money and free time. I'd say a control issue. How dare someone speak badly or voice an opinion. Freedom of speech doesn't exist.