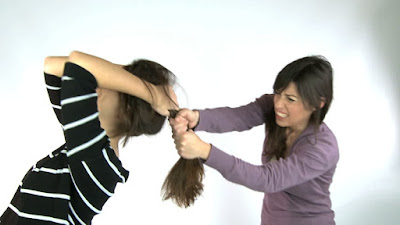 KUWAIT CITY, June 11: When a Kuwaiti woman accidentally discovered that her husband is married to another expat woman she reportedly went to the apartment of the second wife and beat her, reports Al-Rai daily. A security source said this was discovered when a Kuwaiti woman, the first wife ordered a meal from the restaurant and gave the address and telephone number of her husband.
Since the husband was accustomed to ordering the food from the same restaurant when he was with his new wife, the restaurant employee told her the telephone number is correct but they have a different address registered under this number. The first wife asked for the address, noted it down and went to the apartment and knocked on the door. When the woman answered, she asked for who the apartment belongs to, and when she said it belongs to her husband and said she got married to the man eight months ago. She told the woman the man met her in a shop where she was selling perfumes, fell in love with her and they got married. The first wife got furious and beat the second wife. Both wives are held at the police station for fighting and the husband has been summoned to solve the ‘mystery’.

---Doesn't everyone know the game of call Pizza Hut to find out where someone lives? Come on guys, you have to be smarter than that!
Posted by Crazy in Kuwait