Faith vs. Your Job 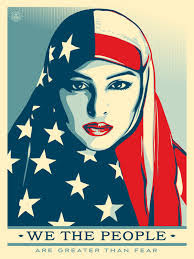 A friend of mine works on Arifjan, the American military base, she is an American Muslim who wears hijab. There are several females on base who do wear hijab with no problem. This is a new year, with a new regime that has taken over. My friend went to renew her access badge which is usually no problem and everyone leaves happy. As she sat down to take her picture the lady asked to see her ears, thinking she just needed verification she showed her ears to the lady. The lady told her 'no I have to see your ears in the picture' my friend was confused and showed the lady her old badge from August and told her she wasn't asked at that time. For those who don't know about badging, fingerprints are also scanned into the system as well as a picture.

My friend waited for the manager to come, once he called her over he showed her a paper with the highlighted rule on showing ears is a requirement although it has not been implemented in a very very long time. My friend left in tears, she had a couple of days off to think about her next move. It was the thought of having a job to support her family or her religious beliefs which no one should have to choose between. Her company did try to fight for her and are continuing a their research on the situation but her badge expires shortly.

She approached the KMOI cell on base (Kuwait Ministry of Interior) about the situation as they have females who wear hijab working for them as well. He was rather shocked by the request and will discuss it with the boss. Even though it is a hard decision and big test it did bring out the best in some people who are truly concerned. Why didn't Triple Canopy send out an email to all concerned and tell them they are enforcing all rules that they previously ignored? Does every company hiring on base have to have a disclosure now stating if anyone wears any kind of faith based covering they will not be able to get badged? Isn't that along the lines of discrimination? I was told in 2012 they were actually telling females to remove their hijab for pictures as well.

In Islam for those who don't understand, it says a woman may show her hands and face only. Every person has a different level of faith, some are lose and wear turbans showing their necks and ears, some are in the middle and some cover from head to toe so one cannot judge Muslims and Islam as a whole just by one example. This rule about ears also applies to Sikh men, who are being asked to take off their turban for pictures. When a person goes into take a picture there is no warning on what will happen so a lot of people are getting a big shock.

Sadly Triple Canopy has no remorse and are rather blunt in their response. This rule is from Virginia, a military bio metric rule that hasn't been followed since the beginning of contracting in Kuwait. American employees are also issued a CAC card to access military systems, their requirement is completely different and they don't need to see ears. When a person wearing religious coverings go to take pictures for their passport they sign a waiver stating their religious beliefs and don't show their ears.

To be continued......
Posted by Crazy in Kuwait