Protest over timings in the Ministry 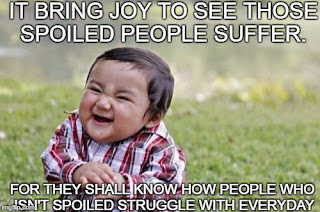 "In this context, Ministry Undersecretary Muhammad Bu Shehri stated the sector has responded to the demands of employees and decided to address Civil Service Commission (CSC) to officially close at 1:45 pm as per the daily 7 working hours stipulated by CSC.
Head of the Workers Union at the Ministry of Electricity and Water Du’eij Al-Azmi also said Minister Al-Fadhel understood the demands of the workers and promised to address CSC on the restoration of the old work timings but said there will be no change until the completion of elink system with CSC. Strike coordinator Aisha Al- Hashash noted the workers have signed and submitted a complaint indicating the car parks at the ministry headquarters are too crowded.
She noted the employees reach their houses at 3:00 pm due to the issue, saying the employees have demanded restoration of the old work timing, which starts from 8:00 am to 1:45 pm, especially as the work in most departments is accomplished within 2 hours- except for sectors dealing with people.
An employee identified as Maha Al-Nassar affirmed serving in the ministry for almost 22 years during which she has reported for duty at 6:45 am and left the premises at 1:45 pm. She reiterated the new work timing will have adverse effect on her daily activities as well as the evaluation report, because she will be rated ‘Good’ instead of ‘Excellent’."

Are these people serious? Do they not get paid to work 7 hours, in real life everyone works at least 9 hours with an hour for lunch. Everyone knows ministry people might work 2 or 3 hours at most as they come in to work, talk about their day, order breakfast, sit on their phones, eat their breakfast, discuss what they want for lunch. They may take a few customers between their phone calls and if you interrupt them they will stare at you while they talk on the phone. How sad that they reach their house at 3 pm, that's horrible?

News flash! Most people reach their homes at 3 pm or later! Is it because you cannot take your lunch and your 3 hour nap on time?