Chili's Seaside gets a Reprieve 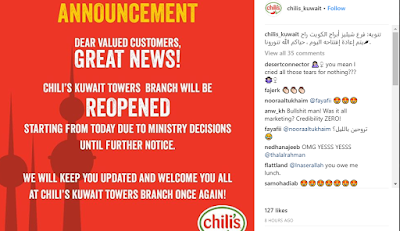 UPDATE: I was told the take over by the giant has been protested and the change has been put on hold for now until things are sorted out. Of course I can't write details because the giant has a habit of threatening me and with the cyber criminal crap going on one can't divulge opinions and details. The take over included the restaurant in the Kuwait Towers as well totaling around 20 restaurants. Ruby Tuesday was not included as the giant didn't like that place.

Looks like Chili's will not be closing, the ministry as sort of saved it I guess? Maybe it was due to all of the news and posts about the closing and how there are so many memories there for people who have lived here a long time?

It's cool but in the event it does close down again will they go through the same scenario as before? I feel like it's kind of like the boy who cried wolf, will they get the same reaction again?

Thanks for the 25% off though, it was a sweet deal.

I talked to one of the staff from Johnny Carino's and they said they will close down as well but they don't have a exact date so there's more to come this month, stay tuned....
Posted by Crazy in Kuwait