Expat party at the Party Villa-Busted by the cops!

Ever since I've lived at this location there's a Kuwaiti party at the party villa almost every weekend. The police drive up to the Kuwaitis and then leave, it seems someone has ties with the po-po. At 10:30 last night I saw some Americans gathering outside so I figured they finally found a place to party. Little by little the contractors pull up in their SUVs , Camrys and Gallants. You can spot contractors from a mile a way by the way they dress. Polo shirts tucked into their Docker's and the others in baggy jeans. Sorry guys but it's so true.

The bodyguards at the gate and the American guy sitting at the table checking the guest list and taking payment makes it so obvious. Some chicks pulling up to the party in a Taxi only to find out their date isn't there. Sorry ladies. Finally I went to bed around midnight. At about 4 a.m. I woke up to the sound of police sirens. The Americans were busted by the cops! A single line of contractors were led out from the villa. I didn't see anyone arrested although there were 6 patrol cars circling the area. They were looking for contractors leaving the party.

Some people thought the police were gone so they came sneaking out of the villa only to find the cops circling again and stopping them to check their civil ID's. I know Kuwait tends to be boring and dull but contractors have to know that alot of people are not fond of them. I'm watching Kuwaiti kids leading the police to the expats who were hiding. I see Kuwaiti girls taking pictures and watching it all go down and laughing. Yeah I was ticked off considering all the harassment going on. I've watched Kuwaiti guys and girls falling out of cars drunk, fighting in the street and acting like fools and no one ever gets in trouble.

I was told the head of CID (criminal investigation department) does not like Americans at all and looks for chances to hassle them. From the airports some expats are hassled. The police station is another subject all together. If you get in trouble with the police even for a simple car accident you might find yourself locked up and don't think your sponsor will rescue you either. I'm not saying Kuwait is a bad country but you have to keep a low profile here and don't think you're invincible, things are constantly changing here and unfortunately some expats have given Kuwaiti's a bad idea by doing stupid things.

Beginning of the night. 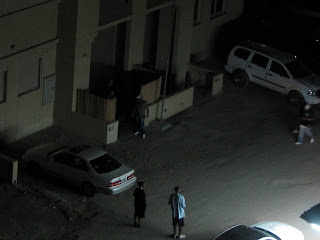 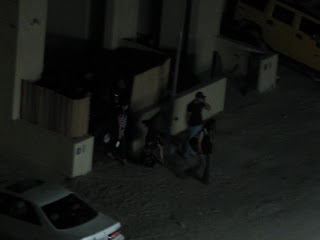 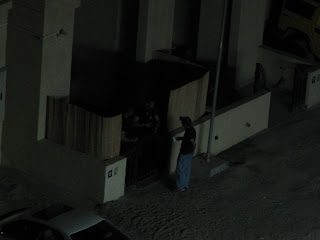 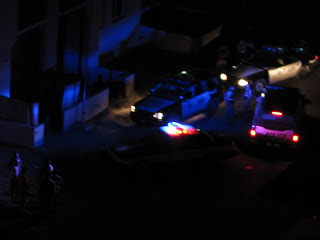 The villa during the day, note the security camera and the privacy thingy. 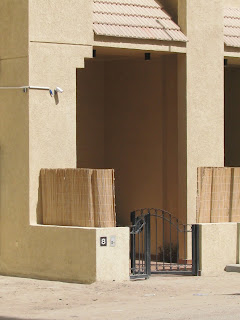 Make sure you can trust the people your partying with.
Posted by Crazy in Kuwait