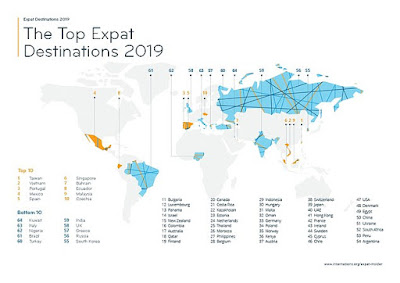 'Taiwan was ranked best, and Kuwait the worst.

More than 20,000 respondents representing 182 nationalities were polled about what life abroad was like for them.

The respondents said they had come from 187 countries or territories before moving to the destination countries in the report. To make the cut, nations ranked required at least 75 expats.

Respondents were asked to rate up to 48 factors, from quality of life, to education options to personal finance.

The US ranked favorably with the quality of medical care and educational options, but not the costs.

The report found 71 percent of expats think medical care in the US was not affordable, compared with 65 percent globally. '

'Kuwait ranks last once again, a position it also held in 2018 and from 2014 to 2016. It still places last and second to last for the ease of settling in and quality of life, respectively, though it has improved for personal finance (from 50th to 38th in 2019). Results for working abroad remain bleak, though: Kuwait places 60th. While expats are mostly satisfied with the state of the economy (63% positive ratings vs. 63% globally) — the majority (59%) moved there for work-related reasons — 36% are unhappy with their work-life balance. All in all, Kuwait is the country expats would recommend the least.

Check out the story link for more details.
Posted by Crazy in Kuwait