Kuwait Skydive has their first Death 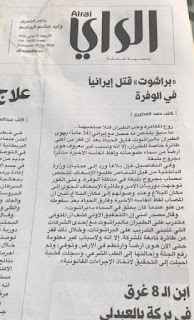 I actually came across this story on FB where a supposed friend of the family was posting about it on a Western expat page. She said the victim was a young 24 year old Irani male who left his house to try out skydiving with Kuwait skydive and that the victim was sent to fly alone, she said he was inexperienced and both of his parachutes didn't open so he died on impact. She also said his family had no idea and was calling his phone not knowing he had died.

The above post was in one of the comments, I don't read Arabic so not sure what it says. She also said the company was trying to cover it up and blame the victim, no stories about the incident had been posted until I saw it on IG today, the accident is under investigation.
Posted by Crazy in Kuwait