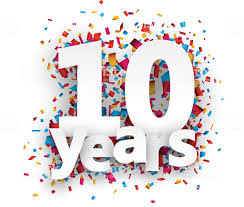 This month I celebrate 10 years of blogging about Kuwait, time passes by so fast. When I started blogging it was during a time when writing was fun, bloggers were the influencers and Kuwait was a great place full of activities. There were a lot of bloggers, most of whom were Arab so having an English blog set me apart from the others but isolated me at the same time.

I was invited to openings and celebrations by companies and it was awesome. However I was never really accepted by the Arab bloggers and once I tried to mingle with a group of Kuwaiti female bloggers but was rejected. I felt I was in high school, I wasn't wearing the name brand clothing or carrying an expensive purse so I was ignored.

Forward ahead to today where blogging is an old fashioned past time. All of the bloggers that I followed have moved on to Instagram or Snapchat showing off the latest trends and cosmetic surgeries. I've also chose to remain anonymous as it's a cruel world out there and everyone is judged for their looks so if a female isn't showing off something or faking it til they make it then you are not worthy of being followed.

Once in a while there's an invite but most of those invitations go to people who don't care about the actual product but show up because they are paid thousands of KD. Sadly that is what sells today, fake people selling a fake lifestyle supported by people who long to imitate them.

I still post occasionally but the feeling is not there like it was before and I know no one cares to read either, they want to see Instagram stories not surf the internet for information. There really isn't much to post about any more either. The only thing that a person can write about is the opening of another restaurant, that's about it.

If you've followed me from the beginning I want to thank you for your support, especially those with positive comments, those really brighten up my day. Until the next post....
Posted by Crazy in Kuwait