Before I left Kuwait I saw a new restaurant being built in Mangaf called "House of Waffle & Steak". It reminded me of Waffle House in Florida. My husband told me it was pretty good so I decided to try it for myself.

The restaurant was nicely decorated and the menu was professional. The waitresses had badges and they had computer generated checks. I had to ask if it was a franchise but I was told it's a Kuwait restaurant.

I ordered the "Good Morning America" for 2.750 which is more than I pay at Applebee's for their french toast. My husband ordered the omlette plate. I was going to order the waffles considering its the House of Waffle & Steak but it was 2.000 KD for one waffle, that's almost 7$ for one waffle. I know it's not the states but if there was 2 waffles for that much maybe. I skipped the waffle. I asked the waitress if I could have a sample one to write about but she just laughed.

Anyhoo the order was pretty big as you can see in the pictures. It was 3 eggs, hashbrowns, toast and meat. Unfortunately the hashbrowns were those frozen triangle ones that end up tasting like pure oil. The waitress told me they had ran out of the fresh hashbrowns.I ordered the biscuits but she forgot to bring them but made sure she added them to our check. I asked for the homefries instead. After 3 minutes I got a bowl of potato chunks with no seasoning and still hard. I took those to go.

The restaurant is nice inside and I liked the decorations. It was good until my husband lit up along with the other guy. That just ruined my meal. The place is so small so there's no way to avoid the smoke. I can give my husband "the look" and he will put it out but it won't work for the other guy. Overall it was an ok experience. My sister says their steak is really good and they have take out. Maybe I will try that next as for breakfast I will stick to Applebee's. 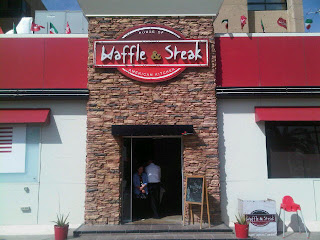 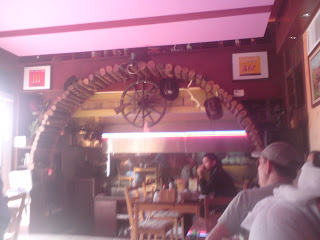 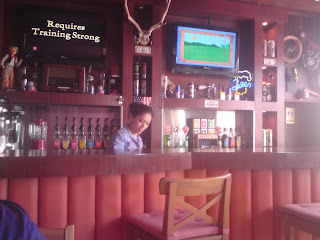 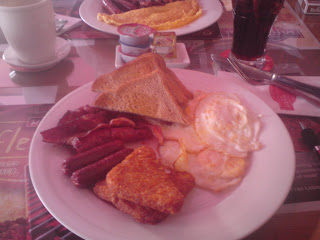 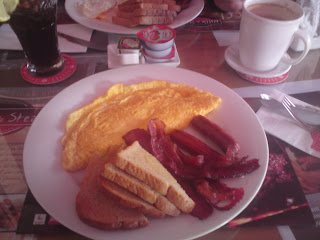 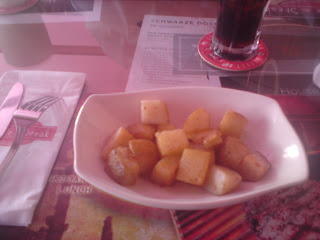 This is just my opinion, you can visit and make your own. You can take a look at their menu via Kuwaitpaperdump. http://www.kuwaitpaperdump.com/food-restaurants/waffle-and-steak/
Posted by Crazy in Kuwait