This is my "green" answer to the tire waste problem in Kuwait: Huaraches! When I lived in California we used to head to Tijuana, Mexico and go shopping. I loved the huarache sandals. They weren't too expensive and were hand made using leather and used tires for the sole which hasbeen used since the 1930's. I say bring some huarache makers from TJ and teach some artisans the craft and everyone can enjoy them and save the environment!

Maybe the makers of the traditional n3al can use tires for soles. It would environmentally friendly. Plans to build a big hole in Jahra for the tires seems like a eco nightmare. Does anyone think of recycling construction waste? 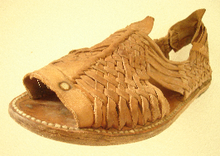 According to Arab Times the municipality is planning to dig a 103,000 square meter crater south of Jahra for disposing used tires. It's predicted 60,000-80,000 tires would be buried there per month according to Ahmad Al-Sebeeh, the director general of Kuwait municipality. They may also build a factory, on BOT basis for treating used tires. Come on Kuwait, we can do better than that for the environment!
Posted by Crazy in Kuwait