I had to wait around in Surra for a meeting so I took my laptop and settled in at McDonalds. Since there is no seating downstairs one must go up to find a table and each morning there is a gang of teenage boys waiting until the last minute to go to school. This time there were around 10 of them smoking. The whole area was full of of smoke, I just gave them a dirty look and of course they started rattling off in Arabic. 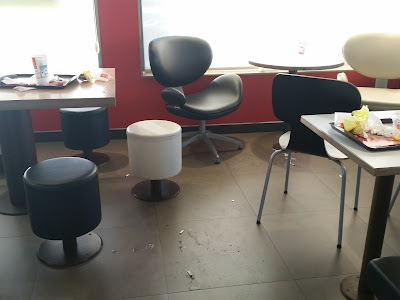 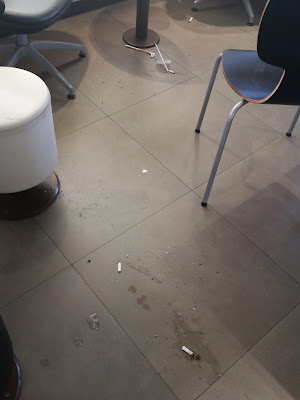 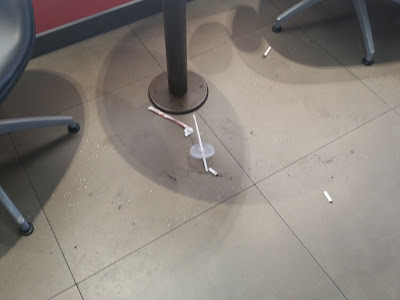 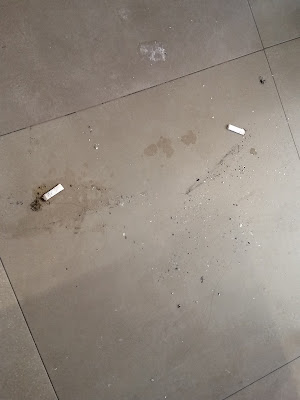 I went downstairs and asked if smoking was allowed, it isn't but the staff has told the hoodlums numerous times to stop and of course the teenagers just say something smart and do as they please. I'm sure the staff are intimated by the squad as I would be. The new generation doesn't have any respect anymore as you can see by the above pictures, that is how they left the area. When I came to Kuwait women were showed more respect, if a female was in the ministry they would make sure she didn't have to stand among the hoards of single men.

As I've found out recently when visiting the ministries that is no longer true. I was the first person waiting 25 minutes for the manager who had gone to pray. As I waited a bunch of men gathered around and once they saw the manager coming up the stairs they almost ran me over to get to his office first. In Mishref immigration the copy area is so small and I had to wade through the sea of bachelors to try and get copies. I was groped on accident and it was really uncomfortable to be there, so if anyone has to go to the ministry please, please make your copies before you get there!!!!!!
Posted by Crazy in Kuwait