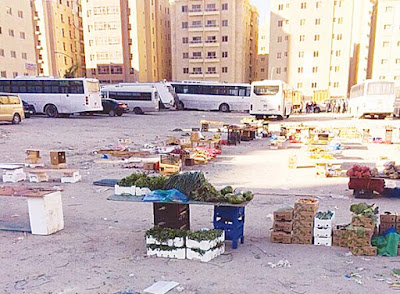 According to security sources, when police officers received reports concerning some individuals using open areas in Mahboula to sell foodstuff, Ahmadi Security Director Brigadier Abdullah Safa instructed to form a team and organize an inspection campaign. Six of the arrested hawkers were in violation of the residency law, while the other was wanted by law for criminal offenses.

The seven suspects were referred with their confiscated goods to concerned authorities where necessary legal measures were taken against them.

Meanwhile, a Kuwaiti woman who was wanted by law for 16 civil offenses amounting to KD 53,609 was arrested and referred to the concerned authorities. Police officers also arrested a GCC national in possession of drugs in Mahboula area. He was referred with the drugs to the Directorate General for Drug Control for investigations.

In the same context, police officers raided chalet area in Khairan where they arrested 10 individuals who did not have their identification documents, seized 20 motorbikes and issued 50 traffic citations.

----See, I told you folks it was ghetto!
Posted by Crazy in Kuwait