Hijab discrimination in Kuwait made Yahoo News! What a nightmare for English Playgroup! 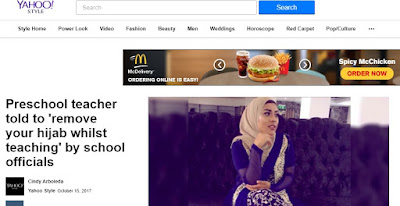 A preschool English teacher was told to remove her hijab if she wanted to be hired by a school in Kuwait. The 23-year-old applied for a job in Kuwait’s the English Playgroup. After an interview, she received an email from a school official saying that her new job depended on whether she was OK with teaching without a hijab on.

Fouzia Khatun shared a screenshot of the alleged email on her Instagram page. The email was sent by Caroline Brooks, a human resources employee from the English Playgroup, a prestigious education company dedicated to early childhood education, with over 25 schools throughout the country.

Brooks wrote, “The customer (parents) do not want their children taught by covered teachers. It is an English school.” She continues, “if this isn’t acceptable to you I wish you every success. This is s a non-negotiable.”

Khatun’s post has received nearly 2,000 likes and 1,000 comments. Khatun, who currently lives in the city of Bradford in England, shared a thorough message, reflecting upon the alleged discrimination.

The teacher wrote, “I applied for a job in Kuwait where I felt I would easily fit in due to same religious beliefs and Islamic mind of thoughts, where I thought being a hijabi would be an honour rather than an accepted dress code, where I was hoping to feel free and liberated, only to go and be asked to take off the one piece of clothing that made me want to move to Kuwait in the first place.”

“I find It disgusting that you think it’s acceptable to ask your employees to remove such a personal and important thing for the sake of appearing physically acceptable to parents, when in fact you should be demonstrating to your students’ acceptance of all kinds of people and presenting this with your varied choice of employee.”

She continued, “There is enough discrimination against female Muslims from non-Muslim countries, it’s extremely sad to see that your school in a Muslim country like Kuwait also demonstrates this kind of discrimination and frankly such a superficial judgmental ethos! I am sorry that you have judged the capability of a teacher based on a piece of clothing that covers my hair.”

“Please stop corrupting the minds of innocent angels and let them blossom into beautiful human beings and not the narrow-minded monsters that you are guiding them towards.”

Khatun told Yahoo Lifestyle she is now suing the English playgroup. She declined to comment any further, citing “legal purposes.”

In a comment on her Instagram page, Khatun states that the school denied her allegations at first and said that they didn’t have an employee named Caroline Brooks, but that they then changed their story. She wrote, “If it was a one-man mistake, an apology would have sufficed but they disappeared for a few days then come back saying she doesn’t work for them. Then come back again saying they didn’t accept me because of my social media and that they have taken action against her.”

The statement reads, “The English Playgroup and Primary Schools employ qualified teachers from all nationalities, religions and backgrounds who serve students as excellent and caring teachers. Allegations of discrimination against hijab-wearing staff are untrue. Our schools proudly employ many hijab wearing teachers and administrators across our schools. The allegations against the school have been disseminated by an unsuccessful overseas job applicant who was refused employment because of inappropriate behavior as illustrated on her social media platform. The opinions expressed by a new employee in the HR department are against company policy and necessary disciplinary action has been taken.”

The English Playgroup then released several images on their Instagram of teachers wearing a hijab while on the job. link

WOW! EPG has a PR nightmare!
Posted by Crazy in Kuwait