Kuwait Earthquake 2017, where were you? 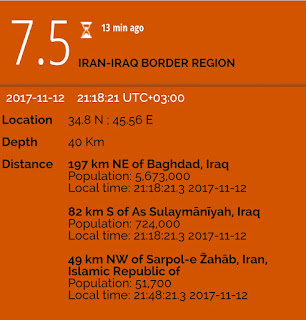 This earthquake totally freaked out so many people but for my family and a few other peopl from California we are used to it but we knew our buildings were earthquake proof. I just imagine those people in those shoddy built apartment buildings were probably freaked out! Most of the buildings in Kuwait are built on what looks like stilts that hold up a massive 10 plus story building. I have a floor on a Kuwaiti house so it is a little more safer.

As for me, I was lying in my bed talking to my daughter who was standing beside me when I felt the bed moving back and forth. As it continued I asked if she felt anything, I had her touch my bed and feel the bed moving and shaking. The nanny and my younger kids came out of the room not knowing what was going on. The doors of their closet came open and was shaking.

The owner's granddaughters who are little were screaming and crying which broke my heart. My sister who is on the fifth floor of an old building called me and was like, did you feel it? My friend was driving so she felt nothing as a few other people didn't know what we were talking about either.

At first I thought it was a bomb to be honest, with all of this talk about war and fighting I honestly thought the new war had began, thankfully it was just an earthquake and my prayers go out to those who were injured and died.