US camps in Kuwait clamping down- Corona Virus 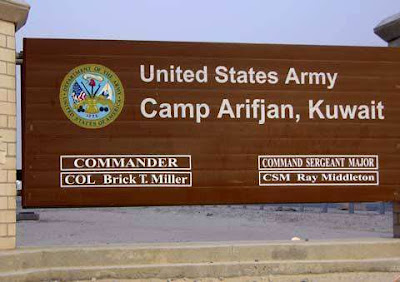 The Security authorities caught 10 Asians including an American, leaving the Arifjan camp who were driving to their residences, reported  Al-Qabas daily.  They are all suspected of coming in contact with a positive coronavirus case, an Indian national who was working in the camp’s maintenance center, a few days ago, but had to be transferred to quarantine facilities. US army camps Arifjan and Buhering have halted the entry and exit of all third country nationals into their camps effective April 15 in an apparent attempt to contain the spread of the coronavirus infection in these camps.

The security forces close to the coast of the Mahboula and Mangaf region seized the vehicles carrying the 5 people, and interrogated them. They revealed that they are working for one of the largest American companies, and that their decision to leave the camp came at the request of the director of the American company, not the US army.

They admitted to the security forces that they were in contact with one of the positive coronavirus cases, which made it necessary to transfer them to the quarantine facilities run by the Ministry of Health.

The Kuwaiti security authorities are closely monitoring those leaving the camp placed under quarantine as anyone leaving could potentially spread the infection in Kuwaiti society. There should be coordination with the U.S. Department of Health and the US army to uncover any other employees likely to be infected, to ensure their safety, under the assumption that the numbers of casualties are greater than the number reported.