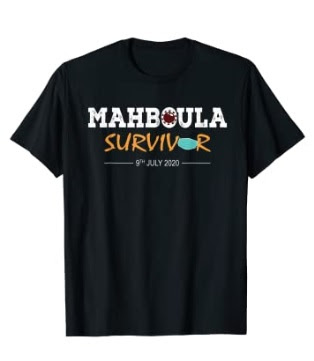 Here's a shirt that's proving popular on Amazon. It was the idea of an Egyptian expat, Mr. M Hassan who came to Kuwait in 2010. My sister had brought it to my attention and I thought it was a clever idea. Kuwait Times article link

I saw that Kuwait Times had posted the shirt on their IG story with 'unknown source' and
I asked my sister to contact him so I could also mention his story and was given the article he had sent to Kuwait Times. In it he mentioned his work experience, and that he left Kuwait on June 29 after a difficult four months. He said ' I designed a T-shirt for fun for people in Mahboula and called themselves 'Mahboulians' as the people who live in Mahboula' After being notified of his shirt being shared by Kuwait Times he contacted the newspaper with his story. If any 'Mahboulians' are interested in purchasing one here's the link

Due to demand he has added Farwaniya and Jleeb

Get yours now, lol
Posted by Crazy in Kuwait