Cancelled my cooking class with AWARE

After really thinking about the whole situation I decided not to continue with the cooking class. When my husband called the AWARE center to ask for a refund he got a rude awakening by the lady who answers the phone. She proceeded to bombard him with questions as to why I didn't want to continue and so on. My husband rarely gets angry but she must have said something that made him raise his voice.

The effort was great the first day although I found out after I decided to cancel that the person who was scheduled to show up didn't make it so they found the Iraqi guy to suddenly fill in. The class was held in a really small kitchen, we sat around a table in the middle of it. We were all bumping in to each other as space was limited. Majority of the class was Arabic which is fine for me but the other women spoke English. Seven ladies including myself showed up, if there were any more it would have been impossible to fit.

I was told last week there would have been a Kuwaiti lady speaking English for the class but I couldn't sit on those plastic chairs for another 2 hours. The food was good but the first day of chaos turned me off to sitting through any more classes. I think 30 KD per person was also a little steep as TIES offers Kuwaiti cooking classes for 20 KD. 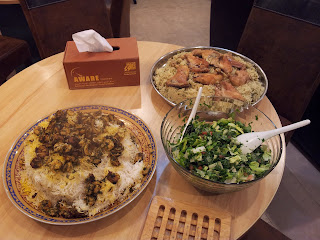 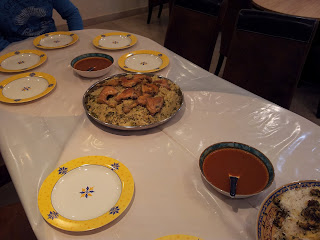 I attended the class with a French lady. Maybe she will let me know about the rest of the classes if she continued.
Posted by Crazy in Kuwait