The 99 banned by Saudi Arabia 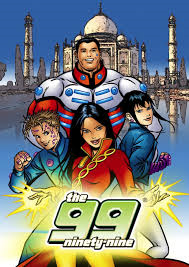 The comic book series based on characters that each personify one of the 99 qualities that the Koran attributes to God has for years been successful, particularly in the Gulf, and has received the backing of Kuwaiti Prime Minister Sheikh Nasar Al Sabah and US President Barack Obama.

Written by Kuwaiti Dr Naif Al Mutawa, The 99’s characters include a woman wearing a burka named Batina the Hidden and a Saudi Arabian Hulk-type man named Jabbar the Powerful.
A television series based on the comic books has aired in more than 20 countries for more than a year and it was supposed to launch in Saudi Arabia this year on MBC3.

However, the government council General Presidency of Scholarly Research and Fatwa has banned the show, saying the 99 attributes of Allah should not be personified.

In its written judgement, the council went so far as to accuse Al Mutawa of not being a Muslim.
Al Mutawa, the founder of Teshkeel Media Group, criticised the decision and said it was “a shock” amid international support, including in Islamic countries.

“I didn’t expect that attack to accuse me of kufr [being an infidel] and atheism,” he was quoted as saying by Arabic website sabq.com.

The series was named as one of the top 20 trends sweeping the world by Forbes magazine in 2009.
Al Mutawa has worked with writers such as Fabian Nicieza, who wrote for the Power Rangers and X-Men comics, and a group of managers including an ex–Rolling Stone publisher, which Al Mutawa has previously said helped make the show also successful in non-Islamic markets.Saudi Arabia has banned numerous artistic works and television shows that relate to Islam, which does not allow any personification of the Prophet (PBUH).

The decision not to allow The 99, follows US broadcaster ABC Family’s decision to axe a new show Alice in Arabia, which had been due to air this year.The drama was based on a teenage girl who had grown up in the US and was then taken to Saudi Arabia by her family after her parents died. In each episode, she would have dealt with various issues regarding living in the conservative Islamic kingdom.

Critics said it would ridicule Islam and inflame already negative Western perceptions of the religion.
The US writer had claimed the plot summary was incorrectly portrayed but the broadcaster decided earlier this month not to risk airing the show, which was yet to be filmed.link
Posted by Crazy in Kuwait