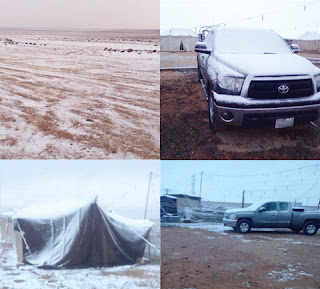 KUWAIT: Videos and photos from social media claimed to show snow falling in Kuwait near the Salmi border, possibly for the first time in modern history. Temperatures in Kuwait can reach 55+ C in the summer months but will often sink to as low as 2C during the short winter period. An unusual cold front pushed into Kuwait Thursday, with temperatures reaching as low as 3C in some parts of the country during the early morning hours.

There is no known record of snow ever having fallen in Kuwait though hail and frost as well as dust storms and the occasional rain are normal. Northern and southern parts of neighboring Saudi Arabia, however, often experience snow falls. Temperatures are expected to recover quickly in Kuwait, with predictions for the rest of the week of highs of 20C though lows are expected to continue to be down around 6C through Sunday before creeping back up. In northern Saudi Arabia, the weather is also set to improve, and temperatures will increase to a high of 19C.

Several of the videos and photos circulated on social media purported to have been recorded in Kuwait but none could be officially or independently verified.-KT

----All I know is the weather is really cold and I was just about to pack up my jackets.
Posted by Crazy in Kuwait