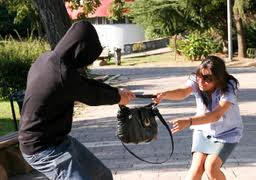 A friend of mine told me about one of his female friends getting robbed in Mahboula the other day. It seems there is a black car with guys in it that pulls up next to a woman and takes her purse and drives off. It has happened several times already so far. It occurs in the area behind Ali and Ghalia, any women walking behind there should take extra precaution.

He went with her to the police station and the lovely policeman asks him if he speaks Arabic, he's American so he told him no, the cop told him 'your in an Arabic country so you should speak Arabic' which is a typical answer for any non-Arabic speaking person from the police. A report had to be filed so his friend could start the awful process of replacing all of her identification cards.
Posted by Crazy in Kuwait