Car accidents in Kuwait- the day After 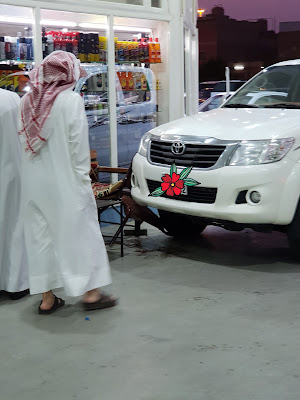 I bought a new car which was hit while parked in the parking lot of LuLu but I got full insurance because of the large amount of stupid people in this country. It was easy because it was anonymous so I just got the report and took it to the insurance and it's being fixed, that was June 28. Fast forward to July 16 when I took my old car to get it washed in Fahaheel.

My car had finished the washing so I went to pull it out and take it to the drying area. I had just put it into reverse and slowly backed out when I saw a white truck speeding into the area so I hit my brakes as his car lunged forward, clipped my car and took out the chairs where people wait. Thank goodness no one was sitting outside or they would have been hit.

So the old dude gets out of his truck walking over with a cane telling everyone in Arabic that he had a problem with his leg, I think he hit the gas instead of the brake and could have killed someone. I get out of my car and told him we need to go to the police station and he was like say thank God everything is ok and there isn't much damage. I called the 112 and a female said the police would come. Well I get a call from Fahaheel police station from an officer who speaks NO English and was babbling something about coming there. I told him the guy didn't want to come etc. After back and forth a cop came and took us to the station.

We told our stories and he tells the old man come at 11:30 and tells me be there by 9 am. So if I didn't understand what he told the old man I would have been waiting for 2.5 hours for nothing. Small things like that really piss me off, why wouldn't he be fair and tell us both to come at the same time, or is it because I'm an expat?

The next morning my sister and I arrive at 10:30 with the old man coming at 11:30 only for us to be told the investigator didn't show up. The old man's son exchanged numbers with my sister and said he would call the next day for us to meet, he didn't call. The following day we just went back and gave the police the guy's number and waited for an hour for them to show. They showed up and that's when the old man blamed me for the accident. The police tells me it's both of our faults, seriously!

Because we disagreed who was at fault we were going to be sent to Ahmadi investigators until the old man decided he didn't want to go again so he said he was at fault. The car I have is an older one so in the end I have to pay for it or chase down the old man's insurance and make a case I think. In the end if you have an old car and cheap insurance you will more than likely have to pay for the damage even if it's not your fault.

My mom was rear ended and put in the hospital after an accident that destroyed her car, she went through the other guy's insurance and after 1 year in court she got 50 KD. I would just try to avoid accidents at all costs because you will end up paying regardless.
Posted by Crazy in Kuwait