A firefighter died and three of his colleagues were injured in a horrific traffic accident while responding to the call of duty. General Fire Department staff expressed in a press statement yesterday their great sadness at the death of Sergeant Yousef Talaq Al-Rasheedi and the injury of three of his fellow firefighters from Al-Mangaf fire station. The department staff added that the accident occurred when the group of firefighters headed to Fahd Al-Ahmad area after receiving a call from the operation center informing them about a family trapped inside a residential elevator.
Lieutenant Hussein Ashkanani, Sergeant Mohammad Zabin Al-Mutairi, Sgt Yousef Talaq Al-Rasheedi and Corporal Mishari Al-Kharaza were all inside the fire car which was involved in an accident, preventing them from arriving to Fahd Al-Ahmad, they added. “The other firefighters sustained fractures and bruises and were administered first aid before being admitted to Al-Adan Hospital,” the staff said, noting that the Deputy Director of General Fire Dept Brigadier Yousef Al-Ansari and Deputy General Director Brigadier Khaled Al-Mukrad and a number of commanders and firefighters visited the injured firefighters at the hospital. The department prayed Allah the Almighty to accept the martyr, heal the injured and save everyone from all harm.

Such a sad accident. May his soul rest in peace. 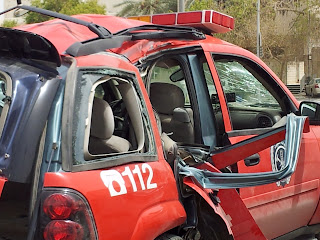 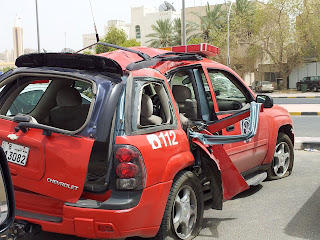