I've read so many stories of children being left behind by GCC students but this story has to take the cake. If the student leaves his child behind and never signs the birth certificate then there is no problem accept abandonment which is really sad but the child can move on but what this Saudi guy did to his ex and son is horrible! 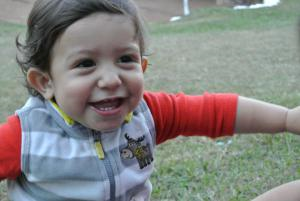 First of all I will like to explain why I am raising fund to get my son's freedom back. The name of my son is Sami Sulaiman Alrajhi who is just one year and 7 months old. His Father is from Saudi Arabia, and he abandoned us two years ago. Since that day things are so tough. While I was pregnant dealing with his absence was so hard, and paying all by myself when i didn't have work or a way to support my son. But even if he knew all that he didn't care if i would be able to prove his first and unique son so far.

Two years had passed after the day he left us and things are becoming harder and harder. On early May 2012, after Sami was already born Sulaiman decided to signed up the Acknowledgement of Paternity in the state of Texas, where Sami was born, so he become the legal nor biological father of our son. On May 28 i asked Sulaiman to sign a permission to travel to visit my family in Guatemala, so he allowed me but when i asked him to sign the permission to travel back to USA he refused by saying "you lost your freedom the day I signed Sami's papers."

Right now, Sami is illegal in Guatemala which means that he is not able to go out of the country until he pays the fine of staying in the country for more days than his visa allowed. So far, the amount is around $2200 (well that was the amount the last time i asked two weeks ago). This charge is because as an American Citizen he is able to enter Guatemala and stay for 3 months, after that period of time another three months can be extended just for one time, after that he will be consider as an illegal. On November 26th, his permission expired and i wasn't able to ask for more time because the 6 months already passed. Since i knew that Sulaiman won't sign Sami's documents i tried so hard to register him as a Guatemalan Citizen to get double nationality and not pay the fee, but most of all to avoid future problems for Sami. However, i couldn't made it even if i have been trying hard and went to the immigration office, the Ministry of Foreign Affairs, and also the American Embassy in Guatemala to find a solution. They said that i cannot register Sami without his dad concern even if am a Guatemalan citizen because he appears on Sami's birth Certificate. They said Sulaiman has to sign all the documents, which he is not willing to do even if i begged him more than once, i asked him many times to not mess up on his son's life but he refused to do it and it seems that he is stubborn to make us suffer.

By now, i feel that all the doors are closing and there is not way to go out. Sometimes i feel that Sami will have to turn 18 to be able to decide by himself and return to his country, which is his right, but if I don't pay the fine or register him on Guatemala he will have to pay it by himself and will be a lot of money (18 years x $20 per day). But there are still some options left, but being honest i do not have money to pay the fine right now. My income in Guatemala is not that good, actually is just allowing me to provide Sami's basic needs, nothing more.

The money that I intent to get though all of you is to first buy a ticket to go to the Guatemalan Embassy in Texas to legalize Sami's birth certificate by the consul which is a requirement for Guatemalan government to use it here. Second, I need to fill a case in a court to get the full custody of my son, there is not point for Sulaiman having right over Sami when he haven't been there for him, and most of all because it will be helpful to take decisions over my son without asking his heartless selfish father. Third, I need to buy a ticket to go to a Saudi Embassy in USA to do some procedures. And finally, to pay the accommodation in USA until the day I return to Guatemala to see my son. Sami has to stay in Guatemala because he cannot travel to USA until i pay the fine. I am planning to travel for 10 days in order to go to all the places i need to go to solve his future.

I hope you will help Sami... I do not have money to pay you back but I will pray for each of you to get the triple that you donate for Sami's cause. I am planning to travel the first week of December because are my vacation. If you need to contact me to check that am saying the truth please do it.

Thanks in advance, and may God bless each of you and your families. fund link
OK, you don't want your family to know about the child but to do something this cruel to someone is just plain evil. Why doesn't the US stop them from coming or if they do they can't leave until they submit DNA or something so this doesn't continue to happen.

Another idea: USE PROTECTION!

The you have citizens complaining about the process of getting a US visa:

MP Mohammad Tana Al-Enezi urged the Interior Minister and his Foreign Affairs counterpart to end the embarrassing treatment against Kuwaiti visa applicants at the embassies of European countries and the US.

MP Al-Enezi accused the embassies of fixing long-term appointments for Kuwaitis without considering their conditions and noted some of the applicants are seriously ill or under intense pressure to meet up with academic studies, so they do not have time for such delays. He argued that Kuwait accords the citizens of these countries respect to obtain visa at the point of entry without effort, but there is no reciprocity in that regard.

He is of the view that the countries in question should not be acting in that manner knowing that Kuwaitis travel there for tourism, medical treatment or studies and not as refugees or beggars.
I agree on certain cases such as illness or emergency to be expedited but as for students, there is no love for them, I know first hand what they do when they "study" in the states and it is far from academic, it's actually just a free trip to live somewhere other than Kuwait and they get paid to party, have a gf, relax (and study for a couple hours) as well as driving around town in their flashy cars. The US should make some international agreement before any GCC students can come to study, for example, if they are charged at any time they have to submit to a DNA test even if they are back in their countries.
It's time to stop the suffering of children left behind because the subject is taboo in their country and they know they will never be held responsible that's why it continues. If they commit the sin of sleeping around before marriage then hold them accountable. No one wants to have to submit their story to these sites to find the missing father:
Saudi children left behind, Kuwaiti children left behind and Qatari children left behind
Posted by Crazy in Kuwait