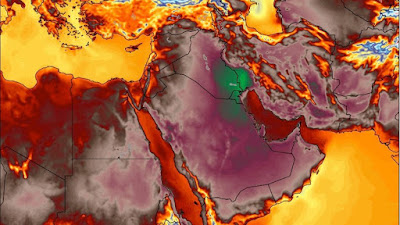 While much of the continental United States is baking in high heat and humidity, there is at least one spot on Earth dealing with far more intense heat.

On Thursday and Friday, with a strong area of high pressure parked across the Middle East, high temperatures soared above 125 degrees Fahrenheit, or 51.6 degrees Celsius, in Iraq, Kuwait, Saudi Arabia and western Iran.

In the community of Mitribah, Kuwait, the high temperature rocketed to a record-setting 129.2 degrees Fahrenheit, or 54 degrees Celsius.

On Friday, Basra, Iraq, which has a population of more than 1 million, also hit 129.2 degrees Fahrenheit.

The heat in Mitribah on Thursday looks legit, according to meteorologist Jeff Masters of Weather Underground, since the nearby city of Basra, Iraq, reached a high temperature of 128 degrees Fahrenheit, or 53.4 degrees Celsius, on Thursday as well.

According to Weather Underground, there are questions about the accuracy of the Death Valley record, but it still stands as the global benchmark (at least for now).

If one were to discount the Death Valley reading entirely, the Basra and Mitribah records would then rank as the hottest temperature on record for the globe.

Thursday's Basra reading ranks as the fourth highest temperature ever reliably measured outside of Death Valley, according to weather historians Christopher Burt and Maximiliano Herrera.

This historic heat is a sign of things to come due to human-caused climate change.

A study published in 2015 found that as global warming continues to boost temperatures and humidity levels, countries bordering the Persian Gulf may become virtually uninhabitable by the end of the century.

-----End of the century, sucks for those who will be alive then.
Posted by Crazy in Kuwait