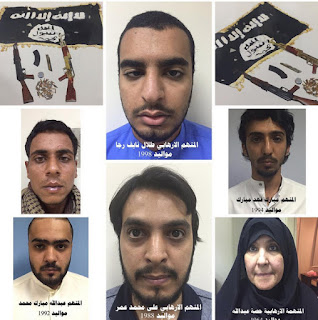 KUWAIT, July 3 (KUNA) — In a successful blow to the so-called Islamic State (IS) group, Kuwait security agencies have carried out three pre-emptive operations in Kuwait and abroad that led to derailing a number of IS plots targeting Kuwait and arresting several IS members.

In the first operation, the security agencies arrested IS member Talal Naif Raja, a Kuwaiti national born in 1998, who was planning to carry out several terrorist bombing operations against a Jaafari mosque in Hawali Governorate and a Ministry of Interior’s facility.

After his arrest, Raja provided detailed information to the security agencies about his plots. He admitted that he has sworn allegiance to IS group and has received instructions from an IS leading figure abroad and planned to execute the scheme at the end of the holy month of Ramadan or during the first days of Eid Al-Fitr, expected to start July 6.

Raja noted that he was ordered to come in person or send a young recruit, unknown to security people, to receive the explosive belt, others explosives or to purchase a rifle or machine gun to use in the terrorist operations in Kuwait.

After repeated attempts, the Kuwaiti security agencies succeeded in busting them and bringing them back despite the intensity of the terrorist operations in the area on the Syrian-Iraqi border, the statement said.

Omar confessed that he has joined the IS group after upon incitement from his mother who also incited his older brother Abdullah, a Kuwaiti national born in 1991, to join the terrorist group. He added that his brother Abdullah was killed in terrorist battle in Iraq.

He unveiled that he left Britain, where he was studying petroleum engineering, after the death of his brother Abdullah and travelled along with his mother to Raqqa in Syria where they joined the terrorist group.

He added that the group assigned him to be in charge of operating oil and gas fields there and his was educating IS members’ wives and children and incite psychologically and ideologically to adopt terrorism.

The statement pointed out that the arrested terrorists had admitted that they have supervised and offered the logistical support to several terrorist operations.

In the third operation, the security agencies busted a four-member IS cell in Kuwait. The statement noted that three of the cell members were arrested, two nationals, namely Mubarak Fahad Mubarak, born in 1994 and Abdullah Mubarak Mohammad, who was born in 1992 and works in the Ministry of Interior, and an unnamed citizen of an Asian country. It added that the fourth member, a Gulf national, is still at large.

It disclosed that security investigators have received information that the first defendant Mubarak was hiding a metal box in a small farm in Al-Wafra area, southernmost of Kuwait, belongs to the second defendant Mohammad. It added that the box was later moved to several other farms in the same area.
After raiding the cell, the security forces found two Kalashnikov machineguns, ammunitions and an IS flag in the box.

It concluded that the security people thanks to the help of Kuwaiti people and the trust of political leadership will continue their readiness to to maintain the state security and people safety.

---The threat is real, very scary indeed!
Posted by Crazy in Kuwait