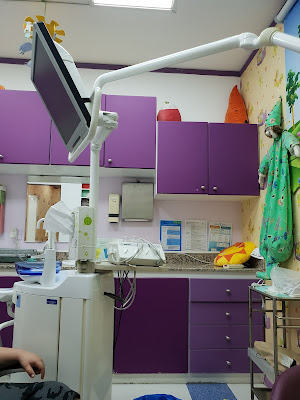 I've been trying to find a good dentist for my kids, I tried Shine dental clinic in Mahboula for my daughter, the dentist gave her a root canal and her tooth turned black, the dentist told me it was normal, later on it had to be pulled. I tried Bayan Dental for my older daughter and they made a mistake with her tooth as well. I decided to try Maidan Clinic as I had a good experience with their travel clinic in Jabriya once. I went to the Fahaheel location which is close to my house.

As first glance it looked alright but when I got into the room it was a bit out dated and the equipment looked rather old. I waited more than 15 minutes for the doctor to come and my son was the only patient in the place. Finally the doctor arrived along with a teenage girl which I thought worked there until she called the doctor mom, the doctor brought her daughter with her to work and she stood there beside her mother through the whole procedure which I found a bit weird and distracting for the doctor.

My son had been to another clinic with his father so I had an idea that the problem was two cavities. According to this doctor it was a huge deal with the pulp and needed a pulp cleaning which was 70 KD along with a filling for 50 KD so in total I need to spend 240 KD for the procedures on my son's baby teeth. My gut feeling told me to walk away but I was concerned for my son so I told her to go ahead with one tooth. I still wasn't comfortable and told her I didn't want to continue and to put a temporary filling. I paid 97 KD for the procedure plus visit and x-ray.

The doctor couldn't understand English, even the word water had her baffled and her bringing her child into the room as she worked on my son left me a little concerned about how they work. I took my son to the government clinic today to get a second opinion. The dentist saw the work and took x-rays, after viewing the x-rays he told me the other doctor had gone in too far with his tooth and that she shouldn't have gone in so deep.

I asked if she did a wrong procedure and he said no, but she over did it. I asked him if he would have done the same and he replied no. So, she should have only cleaned the cavity and filled it instead of taking out everything inside. Now my son will have to have a crown on his tooth and the doctor told me it won't last the next four years because of the work she did. He told me not to go to private clinics because they aren't trained very well.

Thanks a lot Maidan Clinic! I will be calling management soon!
Posted by Crazy in Kuwait