Yes, the Corona Virus has hit Kuwait thanks to those to who came back from Iran which is now the epicenter for the disease in the middle east. As of today there are 45 confirmed cases and the travelers from Iran are being quarantined in Al Kout Beach Hotel, not a hospital. I was shocked to learn that the people weren't in hotels but in a hotel in which the staff have found themselves in the middle of this problem and cannot leave either. There are reports of citizens who were under home quarantine left their house and went out to work and clinics.

Most people are told to avoid the Fahaheel and Mangaf areas but most of the people who visit Iran live in city areas like Rumathiya and Jabriya so it's better to take precautions and stay home of possible. Schools have been told to take an extra two weeks off after this week, my kids are happy with that.

UPDATE: It looks like people are being removed from Khairan resort by 9 am tomorrow as 236 chalets will be used to quarantine people. Nearly 400,000 people will return after holidays. 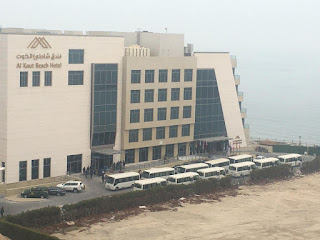 The above videos are all over social media, showing how angry people are at being held in the hotel. I feel sorry for the staff and medical people who are being yelled at for doing their job, they are mostly expats and are only doing what they are told. Outside of the hotel there are army personnel walking the perimeters with guns.

I don't know who owns the hotel but this isn't good for business and after this is over with I don't think anyone will book there again, the government might as well just buy it.

All National Day activities have been canceled and from what I've read staff from the Ministry of Health have been called back to work and their leave canceled. Only time will tell what comes of this situation, we all need to pray for a good outcome and no deaths.