American caught with drugs during Ramadan 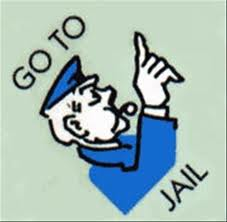 Drugs with US citizen: An American citizen was arrested for possessing drugs and sharp objects, reports Al-Seyassah daily .According to security sources, the suspect was sitting inside his vehicle, which he had parked on the roadside when he noticed a patrol vehicle approaching him. He immediately fled from the location but securitymen chased him and eventually forced him to stop. They checked his details to discover he is an American citizen. They noticed his disoriented state while he was trying to hide a bag under the seat of the vehicle. They checked the bag and found drugs and sharp objects inside. He was arrested and referred with the items to the concerned authorities for necessary legal action against him.

I wonder if he works for ITT? Let's see, he will probably get the maximum jail  prison time for A) having drugs and sharp objects- B) Drugs during Ramadan? Oh, you're really in for it- C) being American, we are not liked these days- D) For being STUPID. One ITT guy got locked up for God knows how long for drugs after he was released from prison for accidentally killing an Egyptian guy crossing the street and no one knows where he is or if he's still alive. Do Americans not realize that once they go to prison they will never be heard from again? If this guy is lucky they will deport him but no after spending some time in a little jail cell with 60 other guys.

Newsflash: The US Embassy will not help you!

Good news, there is a job opening now in his company.
Posted by Crazy in Kuwait