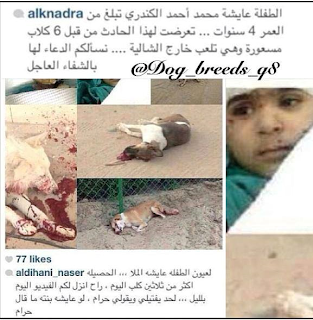 Kuwaiti amateur snipers massacred more than 30 dogs in the Gulf emirate during an attack on their hideouts in an isolated area following a dog assault on a little girl.

The armed snipers from the Kuwait Shooting Club decided to form a “massacre team” and raid dog concentrations in suburban Kuwait after several animals attacked a little Kuwait girl and inflicted severe injuries on her.

The team’s leader said they decided to launch the raid to avenge the attack on the girl, Aisha, adding that the incident followed reports of persistent attacks by dogs on people.

“We killed more than 30 dogs. They are not guard dogs nor do they belong to any one. These dogs have attacked too many people and it seems that they love blood…we noticed that some of them are savage dogs which run very fast,” Nassir Al Dihani said, quoted by the Arabic language daily Al Watan.(link)

I read about this yesterday on the PAWS FB page yesterday. Great way to represent the athletes of Kuwait, way to go morons.
Posted by Crazy in Kuwait