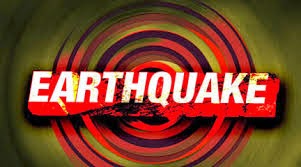 Today around 2:25 pm I was at my sister's house getting ready to leave when I felt something weird. I thought I was having a dizzy spell but as I sat there shaking I realized it was a freaking earthquake! Although there have been several I never felt it until today. I had instant flashbacks of the great Landers earthquake of  1992. I started thinking about how buildings in Kuwait have no code and the Minsitry is lied to with fake blue prints and they never check up on buildings. I think about how they are built so close to one another and worry about what would happen if a major earthquake happened here, would they all crumble and fall on top of each other?

"Q: How ready is Kuwait to face a strong earthquake?
A: We made a study on the assessment of seismic hazards. This is to study how the magnitude of earthquakes that are likely to happen in Kuwait and how ready are the urban areas to absorb the shockwaves of such strikes. We also tried to study the earthquakes that happened in Iran and their impact on Kuwait.We conducted studies assuming that an earthquake of 7.5 magnitude strikes Iran, and then calculated the magnitude in which it will be felt in Kuwait. We found that if such an earthquake takes place Kuwait will not be affected. The maximum that will happen is we will slightly feel the earthquake.However, answering your question, Kuwait has no regulations concerning earthquakes. There is what is called the building code for earthquakes. However in Kuwait we are only using the general code when it comes to buildings. Kuwait also lacks the technological advancements to limit the impact of earthquakes but now there is a project developed by KISR to create a center that works on reducing the impact of any earthquake that might take place in the future."
Posted by Crazy in Kuwait