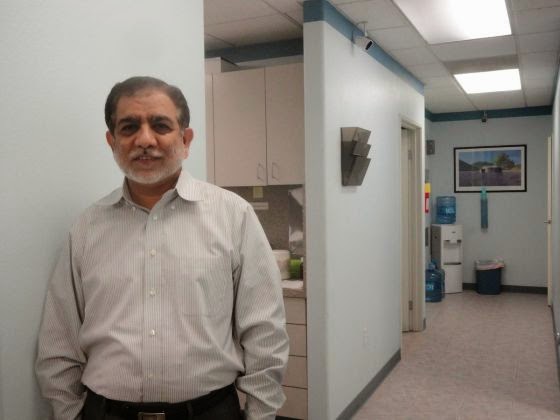 When he immigrated to America about 30 years ago, Makbul Patel experienced something he hadn’t in his native India – a bone-chilling winter.

Patel, who lives in Riverside with his wife, Nasim, said his first stop when he came to the United States to continue practicing dentistry was Chicago.

“It was amazing,” he said. “When I came to Chicago, I saw my first winter. I didn’t have any exposure to snow.”

A friend who lived in California called Patel and urged him to come to warmer environs, and six months later he headed west to get started on three decades of serving patients in the Inland Empire and helping the community through his work and volunteer efforts.

Patel, 57, earned recognition from the city in late 2014 for his service when he received a Riverside Heroes Award.

Not only has he served thousands of patients in the Inland Empire since 1990, Patel also founded Al-Shifa Dental Clinic, a free clinic in San Bernardino that provides care to patients regardless of their income, social background, religion, race or ethnicity.

Patel, a devout Muslim, sees his mission to help people in need as a duty, he said.

“In my faith, medicine is a noble profession,” he said. “So serving the community is one of the noble things to do.”

Patel also was honored for his service as past chairman at the Islamic Center of Riverside. Concerned about the rise in anti-Muslim sentiment after the 9/11 terrorist attacks, Patel spearheaded several efforts to connect the Muslim community with Riverside at large. He launched an Open Mosque Day event, inviting the public to visit and learn about Islam.

He helped to establish the Annual Ramadan Iftar Dinner in Riverside, an event that brings residents from various faiths and walks of life together.

Omar Zaki, who met Patel more than 15 years ago at the Islamic Center, nominated his friend for the Heroes Award.

“What really drives him is his religion,” Zaki said of Patel. “As a Muslim, it’s his responsibility to help others. He does this without asking for him. He is the guy in the back of the room doing 90 percent of the heavy lifting.”

Zaki recalled how Patel created an annual event that recognized students graduating from high school and going on to college, giving each youth a gift and providing them with a boost from the community.

He lauded Patel’s outreach to the community and added that he feels his friend defies stereotypes some attach to Muslims.

“This man has really tried to demonstrate to everyone he has come across what the meaning of being a good Muslim is,” Zaki said. “He does so with his generosity. We as American Muslims need more Dr. Patels.”

Patel, born one of 10 children in Gujarat, India, was the first in his family to become a dentist, but he won’t be the last. His son Sameer and daughter Asma are both in dental school, and so is a nephew. His youngest son Hamza is at UC Riverside and is considering dentistry as well.

Patel’s nonprofit dental clinic is closest to his heart. Patel said in 1999, a group of Muslims started a nonprofit medical clinic in the unincorporated area of Muscoy. In 2004, Patel opened a dental office there.

Growing up in a large lower middle-class family on his father’s teaching salary, Patel said he learned early the value of a dollar. In his private practice, he saw that people were in need and wanted to help them, he said.

---Kudos to this man helping out people in my hometown of Riverside, California.
Posted by Crazy in Kuwait