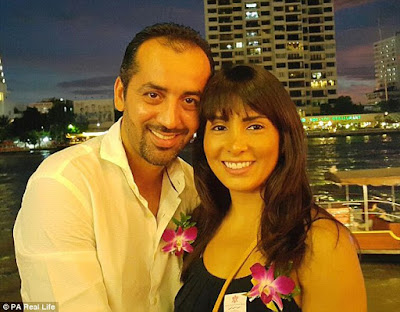 A woman has revealed she flew 5,000 miles across the world for a first date with a man she'd met online just 14 days earlier - and now travels the world with him, and he foots the bill.
Lauren Levy, 35, from Louisiana, met Hani Alkoot, 40, who lives in Kuwait, on a website that connects attractive singletons who want to travel with 'sugar daddies' generous enough to cover the cost.After just two weeks, the pair decided to fly to Amsterdam – halfway between their respective homes

The sparks flew, and the couple have been travelling the world together ever since meeting last year, visiting three countries in 10 months. Mr Alkoot pays for all Miss Levy's travel expenses and has so far spent up to $12,000 (£8,400) on each trip - including five-star hotels, tickets to shows and Michelin-starred restaurants. He estimates that he has already spent $35,000 (£26,000) on their three trips - to Amsterdam, Dubai and Thailand. Prior to meeting her now boyfriend on MissTravel, Miss Levy, who works in sales for Mercedes Benz, had been single for 14 months.

She said she was looking for a well-travelled and experienced man - but found them in short supply in her hometown. It was there she met Mr Alkoot, an oil-worker, and they messaged every day for two weeks. She said: 'Hani was very funny, intelligent and generous. 'After two weeks, he suggested flying me to Amsterdam, so I could join his 40th birthday celebration. 'I didn't want to go on my own, so he paid for me and my sister Blair, 33.

'We stayed in the bed of his apartment for a week and he stayed on the sofa – he was a real gentleman. 'It was the craziest thing I've ever done. I never thought I would fly half way around the world for a stranger.' Miss Levy told of how she felt nervous because they had a week to spend together. But after a few hours in each other's company, the pair relaxed as if they had known each other for months. 'We hit it off straight away and there was a real chemistry for friendship there, but I wasn't sure romantically,' said Miss Levy. 'After a few days, he started to take my hand as we toured the city, and when I left we had a passionate kiss goodbye. 'I knew this was something I wanted to pursue.' Once Miss Levy got back to the US, she kept in constant contact with Mr Alkoot, concocting ambitious plans for their next destination. link

----Is that something for him to be proud of?
Posted by Crazy in Kuwait