National Works Museum to be Demolished 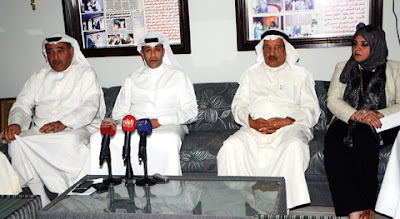 KUWAIT: The Kuwait House for National Works Museum along with other NGO headquarters located on street 70 in Shuwaikh will be demolished soon to complete a road development project in the area. The government gave them a deadline till July 1, 2016 to leave the buildings.

The museum hosted a press conference on Sunday evening to call on the government to extend the period for them or provide them an alternative place. The 10 affected societies are Kuwait Society for Human Rights, Kuwait Association for Accountants and Auditors, Kuwait Environment Protection Society, Kuwait Economic Society, Kuwait Society for Traffic Safety, Kuwait Association for the Employees of the Ministry of Communication, Kuwait Journalist Association, Popular Theatre, Kuwait House for National Works Museum and the Charity Society.

Important landmark
Yousef Al-Amiri, Director of the Kuwait House for National Works Museum, said the museum is an important landmark in Kuwait that has archives of the most important period of Kuwait’s history – the Iraqi invasion. “The museum was founded in 1997 under the patronage of late Sheikh Saad Al-Abdullah. Some volunteers and I have collected visual and audio materials from our resources and we received financial support from the late Jassem Al-Khorafi,” he noted.

The museum is very active. “We receive about 150 students daily who come on school field trips to learn about Kuwait history. Also, this museum is included in four pages of the textbooks of the fifth grade. Moreover, all foreign military delegations visiting Kuwait visit the museum, in addition to other delegations and Kuwaiti visitors and residents. We also have twinning agreements with 29 countries that have a booth of Kuwait at their museums, which is a great achievement for Kuwait,” added Amiri.

Establishing this museum cost over KD 600,000. “We operate this place from our resources and donations without governmental support. Just two months ago, we newly built a hall that we haven’t used yet, which cost KD 80,000, and the government wants to demolish it after two months. We call upon the prime minister to provide us an alternative place to move to and to extend the deadline by three years. We appreciate that the government extended the period in the past but they didn’t provide any replacement locations,” he concluded.

International unions
Around 135 Kuwaiti volunteers work in the 10 societies that are affected by the decision. Ahmad Al-Faris, Chairman of the Kuwait Association for Accountants and Auditors, said that the Association was founded in 1973 and serves the whole community. “We hold training courses inside and outside Kuwait and are a member of four international unions. Last week we held an important international forum in Kuwait, and if our association is demolished, then we won’t be able to serve the community, as we are supervising over 60 accounting and auditing offices. The association has trained over 1,200 people and has also participated in preparing laws,” he pointed out.

“As an NGO, we have limited resources, yet we have found a place and will start building soon, but we need time. So we either need a temporary alternative place to move to or extend the period to allow us to stay till the building is ready to move,” Faris added.

Healthy environment
Wijdan Al-Eqaab, Head of the Kuwait Environment Protection Society, made the same demands. “Our society was established in 1974 and aims to protect the rights of people to live in a suitable healthy environment. We provide training, awareness and education to people and we have received hundreds of students for training. We also participated in amending the law related to the environment. Furthermore, we have many volunteers working with us and demolishing the society will make them refrain from volunteering. We have found a plot to build our new headquarters on it, but it’s without any infrastructure since 12 years. So we demand to prolong the deadline,” she stated.

-----These are the old buildings at the very end of Gulf Street near to the giant oil company headquarters. The country is getting rid of the old structures, 'out with the old and in with the new' kind of campaign I guess. Bayt Lothan to be demolished under the same headline, it seems as if the new generation is trying to erase the past which is sad. Kuwaitis have that one old family member they are waiting for to die so they can take their house and sell it for profit, shame on you! Family values and feelings have been replaced by greed.

As far as the museum goes it need a total overhaul and I'm surprised they built a new hall, I hope they updated the whole place as it was old, dark and lacked TLC (museum post). You can also find Sheikh Fahad's car there too (post). I truly hope the government can help all of these NGOs find a suitable housing. Why didn't the government build an alternative location like they do for others? Because they are privately funded? It seems as if establishments that are free from wasta and corruption are left to defend themselves alone. It is 2016 yet some tactics are so 1800's.
Posted by Crazy in Kuwait