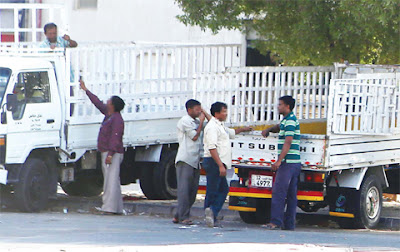 KUWAIT CITY, Sept 14: The number of workers needed for the environmental fuel project is about 26,000 and around 1,000 employees of various nationalities have been arriving weekly for this purpose, reports Al-Rai daily quoting sources from Kuwait National Petroleum Company (KNPC).

Sources affirmed 65 percent of the project has been accomplished and 80 percent is expected to be done by the end of the current fiscal year on March 31, 2017.

Sources disclosed the labor force for the environmental fuel project has solved part of the problem related to empty buildings and apartments for three years in Fintas, Mahboula and Mangaf.

Sources said the contractors prefer these areas due to their proximity to the project sites while recent reports mentioned that 60 percent of residential buildings and apartments in these areas have been empty for three years so the rental fees reduced significantly.

Sources added the target number of workers as per previous plans is 50,000 at the peak of the project, although the contractors will present their plans next month to determine whether they will execute the work with this number of labor force or reduce it.

Sources confirmed the workers involved in the project solved about 30 percent of the problem faced by the residential real estate business in the aforementioned three areas, although several residential buildings are still empty.

Talking about the empty residential buildings in Hawally, Salmiya and Farwaniya; sources pointed out the buildings in these areas do not attract contractors because they are far from the project sites. Sources explained the role of KNPC is to open a labor file at the concerned government body, indicating other functions such as hiring workers and housing them are under the jurisdiction of subcontract.

--------I know the owners of these buildings want money but Mahboula is already home to hundreds of thousands of bachelor laborers who wander the streets in their futas and eyeball any woman they see. I moved to Mahboula and due to the fact I have daughters and never felt comfortable being stared at by these guys I had to move ASAP. It really isn't fair to families who can't afford rent in other areas to have deal with this increase. There is no where else to go and as far as safety goes, it is scary to go out and be approached by a group of 20 guys walking toward you.

I've watched the cops come to the area and put up their check points while the building next to mine that housed bachelors had around 150 guys hiding in there until the police left. The door opened up and they took off running! The area is full of prostitutes and people wanted by law, it's turning into another Jleeb shuyoukh. No more going to the beach during the weekend, especially on Fridays as it is swamped with bachelors, they run across the the road staring you down as you try to avoid hitting them. Let KNPC house them in Ahmadi, build your own buildings to keep them close instead of forcing them upon families who have no where else to go!
Posted by Crazy in Kuwait