Kuwaiti auto insurance after an Accident 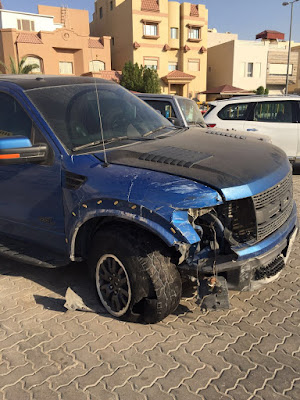 My friend was involved in an accident the other day which did significant damage to the truck as you can see. On the highway there are 2 designated lanes for turning left and 4 other lanes to go straight. Normal human beings would know the rules and follow them but this is Kuwait. The truck was in the first lane heading straight when the female driver in his right lane decided to turn left, right into the truck. Luckily the truck didn't hit the solid light post or it would have been totaled.

Second step of course is the dreaded police station visit, if you can find the correct police station as a small border will determine where you go. The investigator established the woman was at fault and she has full coverage insurance. Simple, right? Wrong! After heading to the insurance company my friend was told that because they don't have full coverage they will only cover 25% of the cost which was over 2000 KD! The make of the truck meant scrap parts are hard to find and are almost the same as new ones.

In the end my friend had to come out of pocket to fix the vehicle and they might see some money after 4 months!!! What a joke! The same accident happened to me, the guy turned left in front of me instead of using the turn lanes, investigator said it was his fault, he was like 'take me to court.' He had a scratch where as the whole right side of my vehicle is crushed. In the end the cheap insurance you pay for is useless just like the grey insurance card you pay for when you get your residency.
Posted by Crazy in Kuwait