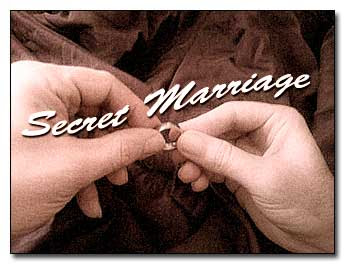 Shush…. The ongoing practice of secret marriages in Kuwait

Anyone born into a typical Muslim family cannot avoid the central place that marriage occupies within the concept of a good Muslim lifestyle. Popular Muslim culture invests marriage with such religious significance, that it is often described as comprising “half of all religion”. On the other hand, getting married nowadays is not easy, thanks to countless social and economic obstacles, including extortionate dowries, costly wedding extravaganzas and lack of housing.

Marriages held in secret are frowned upon in Islam, and some types of such unions may even be considered haram, despite being prevalent in conservative Arab societies where premarital or extramarital sex is taboo. It is not uncommon, however, in Kuwait for men to take a second wife without permission from his first or from marrying ‘temporarily’ for other reasons.

People have different motives for entering into this category of marriage. Defenders of such marriages claim that it allows women who might otherwise be unable to enter into a full-fledged marriage, or perhaps don’t want to contend with the demands of a full-fledged marriage, to pursue their personal interests within a recognizably Islamic framework. They concede that the practice is not ideal, but don’t condemn it as sinful.

Kuwait Times spoke to some women who are married secretly, and therefore preferred to remain anonymous. For a 32-year-old divorced Saudi woman, marriage is all about getting a stable life for her son. “Being a single mother is not easy. With the high school fees, rising rents and low salaries, my son and I could hardly survive,” she said. She explained that the Saudi community kept hounding her after her divorce, especially since her ex-husband is her cousin.

Moreover he only gives KD 50 monthly for their son. “After I got fired from my job, I had no income. I went crazy, as I didn’t want to lose my child. So I went to an Awqaf-run charity, where a man there helped me. After a couple of months, he asked me to marry him as his second wife, but in secret. Neither he nor me want our families or his first wife to know about it,” she told Kuwait Times.

She said with tears that she was steeped in debt, had no job, no money for school fees and no new shoes for her son. “I had to marry him. He is a good, rich man, and was kind to me, so I agreed to marry him in secret.” After getting married by a licensed sheikh but with no contract in court, her life changed for the better. “I now have a decent job at the Ministry of Awqaf, a big apartment for me and my son, and I even have a maid, so no more doing the chores,” she said with a smile.

Urfi Marriage
One type of secret marriages is “Urfi”. This form of marriage does not require witnesses, and is not registered with state authorities. Couples repeat the words “I marry you” and sign a paper stating that they are married. In Arab countries, Urfi is a way for people to have sex with each other within what is perceived to be a licit framework. The relationship is often kept secret from family members and women often become pregnant but are unable to prove they are married or get a divorce.

For D O, a 23-year-old woman, Urfi marriage was her solution to get married to her poor Christian lover. “My family will not allow me to get married to a Christian man, who also does not have money for Shabka (gold) and cannot afford to throw a big wedding party. We were in love, so we chose Urfi marriage because we did not want to do any haram acts,” she told Kuwait Times. She said that they are now husband and wife, and will officially announce their marriage when he is ready and converts to Islam next month.

Misyar Marriage
Another type of secret marriage is Misyar, which can be defined as a marriage contract between a man and a woman in which the woman waives some of the rights she would have in a normal Islamic marriage. For spinsters, getting older means it is increasingly difficult to marry. In this case, a woman opts for a husband who is not able to fulfill normal marital duties.

N S, a 36-year-old woman, considers that marrying such a husband is better than remaining unmarried. “Being a spinster in Kuwaiti society means that you are sentenced to death,” she reasoned. She said that she got married secretly to a Kuwaiti with four children. “Misyar, as they call it, was my only way to get a husband.”

N S is furious with Arab societies and how they force a woman to get married even if she is happy with her single lifestyle. “My family forced me. Every day they told me the popular saying, that ‘a shadow of a man is better than a shadow of a wall’. To me it makes no sense, but to many people, having a husband is a priority. My friends stopped welcoming me at their homes because they were scared of me stealing their husbands!” she exclaimed.

Kuwaiti Laws
A Kuwaiti fatwa official told Kuwait Times that marriage in Islam is a solemn contract for which the Sharia lays down rules and arrangements to guarantee its stability. An Islamic marriage has to meet certain requirements such as ishhar (announcement), payment of the mahr (dower), the consent of both parties, the permission of the wali (woman’s guardian) and the presence of witnesses.

So all kinds of secret marriages are haram because of the lack of one or two of these rules, he added. And this is enshrined in Kuwaiti law.

In Kuwait’s personal status laws – the codified law no 51 of 1984 which applies to Sunni Muslims – a woman is never free to make a marriage decision on her own. She must have a male guardian (wali) do so on her behalf, regardless of her age.

Witnesses to the marriage must be Muslim men for the marriage to be valid. In addition, a man may legally have up to four wives simultaneously. But if the first wife suspects her husband is having a relationship with another woman, even if they are secretly married, the first wife can accuse him of zina (adultery).

-----Unfortunately this is happens more often than not with married and divorced men. Married men are not happy and want a variety, ladies...has your husband been going to 'dwaniya' more than usual? Is he taking more business trips? Has intimacy changed? If yes, your husband may have a gf or secret wife. Divorced men haven been put through the wringer and don't want to have a legal marriage as they are more than likely paying most of their salary to their ex-wife and are totally burnt out on relationships.
Posted by Crazy in Kuwait