National Museum...Martyr Museum to be Demolished 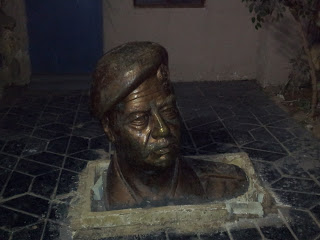 “This museum was launched in 1997, and during these 20 years, I collected all the items including the audiovisual materials. I did everything from my own resources with the support of donations. I have spent over KD 600,000 on this historical work, and they want to demolish everything,” said Dr Yousef Al Amiri, President of the Kuwait House of National Works Museum.

He was ordered to evacuate the state property by 1 July 2016. It is to be knocked down to make way for local road works.

Al Amiri’s group of volunteers had hand crafted the dioramas, transforming 10 sections of villa 32 in northern Shuwaikh into an amazing private interactive museum. .

The museum was included on four pages of the social studies curriculum and hosted around 150 students daily on school trips. Foreign delegations toured the museum as part of their state visit, but the private museum was also open to the public for a KD1 entry fee. The museum had even built up twinning agreements with 27 countries for a permanent Kuwait booth at their museums.

It contained a bronze statue of Saddam Hussein, which an American soldier brought from Baghdad. Al Amiri refused an offer of $1 million for the statue from a Qatari sheikh. It also contained a cigar, diary and outfits of Odai Hussain.

The tour of the Kuwait House for National Works Museum began in the first hall with an audio visual presentation on the origins and early history of Kuwait. The hall was decorated with a giant map of Kuwait and portraits of each of the country's rulers.

A murky trail led to the Invasion Tunnel, where the saga of the 1990 Iraqi invasion was narrated through to the 1991 liberation. An effective combination of light and sound effects brought the scene to life. (radio communications, machine-gun fire, explosions). The museum preserved remnants from the war including weapons and uniforms.

Each of the Allied and NATO Forces had its own wall of photographs. Letters of congratulation, Official communications, military documents and wartime memos were also featured in this section.

The final Hall of Martyrs and POW’s paid homage to the tortured and fallen, and to the POWs still missing in Iraq. The museum also had a cinema for an audience of one hundred people; a Photo Exhibit Hall and a Hall of Peace."


You can see my post here about my visit to the museum, it needed a lot of TLC back then and now they want to destroy everything about the invasion! It's bad enough the country deleted it from the government books and now it's like they want to forget it happened. I'm sure the families of the martyrs don't forget, every day they live life without their loved ones. I know a lot of people who were here when the invasion happened, they tell tragic stories of hiding weapons. using trash trucks to move guns, family members being taken from their homes, glasses of the cousin who was kidnapped by the Iraqi army and never seen again and so on.

I have my kids ask their father about what he experienced and he rarely talks about it but they need to know. I've had my kids look at this website to see pictures of the invasion. I've visited the museum of @hamedalfuzia1 who lost his son and other family members in the war.

WHERE IS THE NCCAL???? Aren't they supposed to preserve this information? Aren't they supposed to protect the past? They didn't help when Bayt Lothan was torn down because the family is greedy and wanted money post. I guess it is left to normal people to carry on the stories of the past, I go around Kuwait taking pictures of old houses before they demolish them. I have several posts on different houses I've found, sadly some have been demolished, maybe one day I will publish them in a book. I really hope all is not lost with the subject of the invasion, if you notice, several museums in Kuwait have only a very small area dedicated to the war which tells us it's not something people want others to remember.
Posted by Crazy in Kuwait