The other day I was reading when I heard a loud bang outside the window, I rushed to see what happened fearing someone had hit my car as the luck I have had with it lately includes getting hit twice while parked outside the house so I parked it in the dirt area only 5 feet from this accident. It wasn't my car but the OSN guy had hit the back of the neighbors FJ when she pulled out from the parking, her car had a scratch and his car, well, as you can see suffered.

It was so hot and considering the police department is like 5 minutes one would think someone would arrive quickly, right? Nope, not in Kuwait, even if it happened in front of the police station it would take forever for someone to show up. Finally, after 40 minutes the cops come, park their car, get out, take a  look at his car and obviously told them to go to the police station.

As usual, the cops wait a minute and then take off to station, maybe. The poor OSN guy's car was trashed and couldn't be moved. The female rode off in her and the neighbor's driver was nice enough to give a ride to the OSN guy. The police just leave you in the street and don't care if your car is damaged or not. 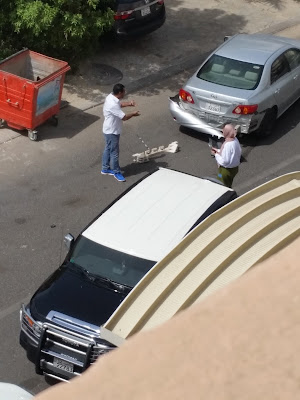 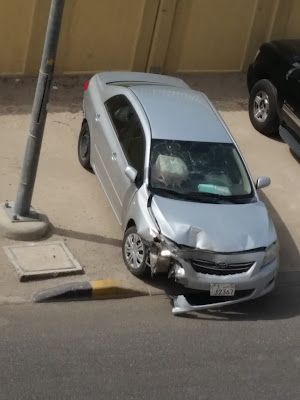 I've had it happen to me before, a Kuwaiti lady slammed into my car pushing it into the median and tore it up. Once the cops came they looked and yelled at me to go to the station as they escorted the Kuwaiti lady leaving me behind. I had to pull out the fender because it was rubbing my tire but no one cared because I was an expat. Once I got to the station I was questioned by some huge muscle head guy asking if I spoke Arabic and throwing my CID at me to go make a copy. It was an awful experience as usual when dealing with police departments as an expat.

If you can avoid an accident do it as to avoid the police station!!!
Posted by Crazy in Kuwait