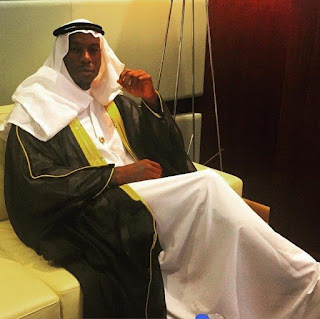 Tyrese Gibson, the Fast and Furious actor and R&B singer, has announced plans to make $700 million (Dh2.57 billion) of film productions in Abu Dhabi. The 36-year-old made the statement on Thursday while promoting his Black Rose album in Yas Mall.

“I want to do a film slate, at around $700 million (Dh2.57 billion), so when Avatar, Mission: Impossible, Fast and Furious, when these movies are being made, instead of us coming to shoot for three-four days, we’re going to shoot in Abu Dhabi for the whole movie,” Gibson told Gulf News. “We’re going to co-finance these movies, instead of just coming here, shooting and leaving,” he added.

The star confirmed he’s ready to pursue the project as soon as local partners approve.
Gibson has previously visited both Dubai and Abu Dhabi on numerous occasions, continuously expressing his love for the UAE.

“When I first came here, it was the first time I had smiled, or felt joy, since my brother Paul Walker died [in November 2013]. God said to me, go to the UAE, there’s blessing on the other side. I am on a mission now to change the perception of the Middle East. God gave me a vision and, Inshallah, this will all come to pass,” he said in an interview with GN.

The rapper was reportedly staying at the chairman suite in the Jumeirah Etihad Towers, where a car passes through one tower to the other as a stunt for the Fast 7 movie.

As for his album, Black Rose, it’s currently a No 1 on the Billboard 200 charts. According to the artist, it will be his last solo album.

-----This guy is awesome, you have to check out his IG @tyrese it's filled with pictures of his recent trip to Dubai promoting his new album Black Rose.
Posted by Crazy in Kuwait