Egyptian tries to kill 5 US Soldiers 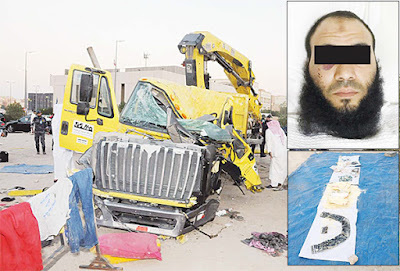 UPDATE: It seems there were actually three soldiers and they pulled the guy out from the burning truck link

KUWAIT CITY, Oct 8, (Agencies) An Egyptian driving a garbage truck loaded with explosives and Islamic State papers rammed into a truck carrying five US soldiers in Kuwait on Saturday, injuring only himself in the attack, authorities said.

The attempted attack is the first by the Islamic State group to target American troops in the tiny, oil-rich emirate that’s a stalwart US ally.

It comes as authorities already increased security ahead of a major Shiite commemoration in the coming days. The state-run Kuwait News Agency identified the attacker as Ibrahim Sulaiman, born in 1988, and published a picture of the alleged assailant in a hospital bed, a bruise beneath his right eye.

KUNA said the five soldiers were not injured. It said Sulaiman had multiple fractures and injuries. It was not immediately clear if the Egyptian had a lawyer.

The KUNA report did not offer a location for the failed attack, though it published pictures of the aftermath of the crash showing a wrecked garbage truck, as well as items it described as a suicide belt loaded with shrapnel. The white pickup truck apparently carrying the soldiers had the left side of its bed smashed in. American forces and others have troops stationed at Kuwait’s Camp Arifjan.

The US military’s Central Command referred a request for comment to US Army Central, based in both South Carolina and Kuwait. The Army did not immediately respond, while the US Embassy in Kuwait City had no immediate comment. Kuwait is a solid US ally following the 1991 American ed Gulf War that ended the Iraqi occupation there. link

----Security on base will be tightened now, thanks a lot moron!
Posted by Crazy in Kuwait