A most generous gift from HH Sheikh Salem Al Ali 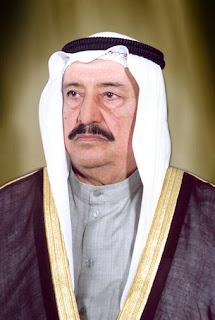 A wealthy senior member of Kuwait’s ruling family yesterday announced a donation of 60 million dinars ($215 million) to help those in debt, those getting married and the learned elite. Chief of the National Guard Sheikh Salem Al-Ali Al-Sabah, in his 80s, said in a statement that the donation would go towards helping those in debt, men who plan to get married and those who complete their doctorates. Any Kuwaiti man who marries a female citizen will receive $21,400 (6,000 KD) while those in debt are entitled to $14,300 (4,000 KD) each, said a statement posted on his Twitter account. A Kuwaiti who completes his doctorate degree gets around $71,500 (20,000 KD), the statement said. Expatriates living in the oil-rich emirate are not included.

Sheikh Salem has restored my faith in men with his generous donation helping the citizens of Kuwait.What a great man as he has also given over 100 million KD to Zakat house. I have already read several comments stating citizens are just getting richer with these payouts and it bugs me.

(As long as thieves don't get their hands on the money and "wasta" is not involved in choosing which citizen receives the benefits it will work out great. It would be great to see other rich people donate to this fund and keep it going for those in need. NOTE: NOT ALL KUWAITI CITIZENS ARE RICH AND HAVE OIL WELLS IN THEIR BACKYARDS! Every time I tell someone my husband is Kuwaiti their reply is always the same "you're married to a Kuwaiti and they are all rich" um no not all of them. Some bloggers talk about all of their LV bags and Chanel items which makes people on the outside think that everyone is rich, I, on the other hand write about reality in Kuwait faced by the normal people working and surviving in Kuwait.

Due to bad decisions made in life by some citizens most are so far in debt their great-grandkids wouldn't even be able to pay off their loans. Most Kuwaitis make 450-700 KD at the most. They get 50 KD per child which doesn't cover much. They get free medical which consists of going to government hospitals and we all know what kind of service people get there so most end up going to private hospitals and paying out of pocket. Education is free which consists of government schools run by mostly Egyptian teachers and don't offer the same programs as private schools so a lot of Kuwaiti kids go to private schools and parents pay out of pocket. They do get scholarships for college and those with wasta can study abroad which is good but not all finish high school which puts them in the 450-700 KD range for those who haven't finished college.

They are given a piece of land where ever the government chooses and 70,000 KD for a house after 10 years of marriage or so and they do have to pay that back of course. In reality no one can build any kind of decent house for 70,000 KD so again they take out loans to cover the additional costs of building a house. So if one receives 450-700 KD about 70% of that goes to pay their various loans. They get food each month but have to pay about 60 KD for the items. Those fancy cars on the streets are probably rented or borrowed from a rich friend to impress people.)

Citizens marrying Kuwaiti women already get 6,000 KD for marriage and now they will get an additional 6,000 KD on top of that, there's going to be a lot of marriages  made and once they receive the money they divorce splitting the money between the two of them or the guy gets a divorce taking it all considering all of the money goes to their account.

Only time will tell...