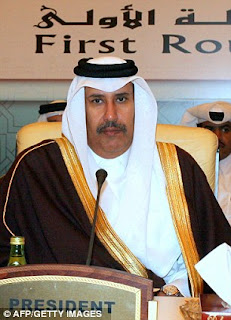 The prime minister of Qatar has been revealed as the mystery buyer who spent almost $100 million to purchase New York City’s most expensive penthouse.
Sheikh Hamad bin Jassim bin Jaber al-Thani brought the luxurious two-story apartment spread over 10,923 square feet in the One57 building back in May.
Furthermore, the billionaire sheikh, who has two wives and 15 children, is reportedly also in discussions about buying four separate, full-floor condos in the exclusive Midtown building, which would bring the total cost to an incredible $250 million.


Good thing about not having too many citizens in Qatar, more money for the sheikhs. (link)
Posted by Crazy in Kuwait