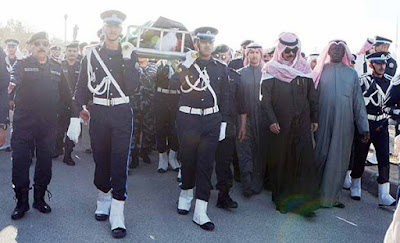 KUWAIT CITY, Feb 26, (KUNA): One policeman was killed and several others injured when they were run over by a vehicle at Dasman roundabout in Kuwait City, a statement by the Ministry of Interior (MoI) said on Thursday.

Security forces have apprehended the perpetrator, named as Abdulaziz Waleed Shaheen Al-Shamlan, after he had fled the scene, the statement added.

The deceased, identified as Turki Mohammad Al-Enezi, and five other policemen who have been injured, served at the General Department of Traffic, the statement noted.

His Highness the Amir Sheikh Sabah Al-Ahmad Al-Jaber Al-Sabah sent on Friday a cable of condolences to the family of the martyred policeman.

In his cable, His Highness the Amir voiced heartfelt and sincere condolences to the martyr’s family who was run over by a motorist.

In the cable, His Highness the Amir prayed to Allah the Almighty to bless the soul of Al-Enezi with mercy in Paradise and to bring solace to his family.

Kuwait will never forget the martyr who sacrificed his soul for its sake, the Ministry’s Public Relations and Media Security Department said in a press statement Friday.

The move is an honor to the martyr’s efforts in serving the country, it added.

The statement referred to the parental feelings of His Highness the Amir towards the martyr, who is a Gulf son to a Kuwaiti mother.

The minister made the statement during Al-Enezi’s funeral on Friday.

The country’s soil embraces today a martyr who sacrificed his soul for its sake, the Ministry’s Public Relations and Media Security Department quoted Sheikh Mohammad Al-Khaled as saying.

The minister prayed to Allah Almighty to bless the martyr’s soul with mercy in Paradise and to bring solace to his family, wishing those injured speedy recovery, the statement said.

Sheikh Mohammad Al-Khaled and some senior officials at the ministry took part in the funeral.

In another development, the Ministry of Interior announced on Friday that it arrested a Syrian resident, who seemed to be in an abnormal state, and his Kuwaiti wife who tried to escape and consequently hit several policemen and injured them slightly.

While policemen were on patrol at Sabah Al-Salem area, they suspected a Syrian resident named Khaled Hasan, the Ministry’s Public Relations and Security Media Department said in a press statement.

Accompanied by his Kuwaiti wife, he appeared to be in an abnormal state, it said, adding that while she was trying to escape, she ran over several policemen and injured them of them slightly.

The ministry found out that the Syrian had a criminal record involving fraud and possession of narcotics.

He was arrested in possession of narcotic pills, it said, noting that he and his wife were referred to investigations, it concluded.
Posted by Crazy in Kuwait