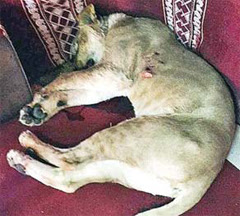 HAFR AL BATIN, Saudi Arabia: A young Kuwaiti man died yesterday after being attacked by a pet lioness. The man was mauled by the lioness at a recreational facility in Hafr Al Baten, near the border with Kuwait, while trying to train the lioness. The main trainer for the lioness had left the man to go to the shop when the attack happened. Neither of the men involved were immediately named. The Kuwaiti man died from injuries to his neck and thighs.

The main trainer, who called for help, killed the lioness after the attack. Keeping wild animals, especially lions and tigers, has grown in popularity in recent years in the Gulf Cooperation Council states despite authorities warning against the practice.

In late 2014, a Filipina housemaid died after being mauled by a lion kept domestically at a house in Kuwait. Lourdes Hingco Abejuela died at a hospital in Kuwait days after she was attacked by the wild animal. Kuwait’s parliament has called for legislation prohibiting the purchase or sale of exotic animals to private individuals. Still wild cats and other exotic animals can be purchased through social media accounts in Kuwait.