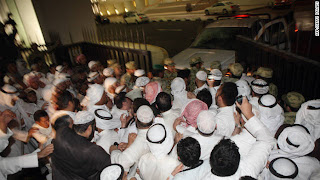 Thousands of Kuwaitis stormed Parliament on Wednesday after police and elite forces beat up protesters marching on the prime minister’s home to demand he resign, an opposition MP said.

“Now, we have entered the house of the people,” said Mussallam al-Barrak, who led the protest along with several other lawmakers and youth activists also calling for the dissolution of parliament over alleged corruption.

The demonstrators broke open parliament’s gates and entered the main chamber, where they sang the national anthem and left after a few minutes.

The police had used batons to prevent protesters from marching to the residence of Prime Minister Sheikh Nasser Mohammad al-Ahmad Al-Sabah, a senior member of the ruling family, after staging a rally outside parliament.

Witnesses said at least seven demonstrators and one securityman were injured and treated on the site. Some activists said they will continue to camp outside parliament until the premier is sacked.


Some of the protestors were said to have been arrested from the Parliament.
The injured included former MP Mohammad Al-Khalifa, Fawaz Al-Bahar, Fawaz Al-Shamari, Mohammad Al-Hamlan, Dr Mishari Al-Mutairi, Mohammad Al-Afasi, Dr Ahmad Al-Zaibadi and Khalid Al-Faraj.
The police had to use tear gas to disperse the demonstrators as they tried to head towards the residence of Prime Minister.


So far Kuwait had escaped violence but I guess the people can only take so much talk and no action until they have to do something drastic. What's next?

CNN also reported about it: http://www.blogger.com/www.cnn.com/2011/11/16/world/meast/kuwait-parliament/index.html?hpt=hp_t2
Posted by Crazy in Kuwait