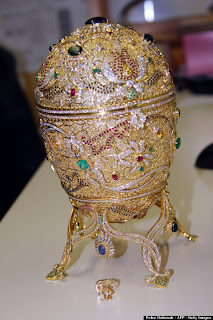 A golden Faberge egg worth around $1.3m has been found after being stolen from its Kuwaiti owners four years, it has been reported.

The jewel-encrusted egg, which contains more than 1kg of gold, was recovered by French police near the Swiss border, according to AFP.

The bejewelled egg was stolen during a burglary of a Geneva-based Kuwaiti import-export firm in 2009, the news agency said.

The egg was found on Thursday during a routine roadblock in a BMW driven by two Belarusian men, while a third was arrested later. They claimed they had found the work of art lying on the ground, or had purchased it at a flea market.

“They’re not talking much. We have the impression we’re dealing with a team tasked with transporting and negotiating the sale of the artwork,” an official was quoted as saying.

The three men were charged with receiving stolen goods and possession of a weapon. They had previously been sought in France and Switzerland in connection with several burglaries.

The report did not mention if or when the item would be returned to its Kuwaiti owners.

Who in their right mind keeps a 1.3 million dollar egg in their office without a bodyguard keeping an eye on it? #richpeoplesproblems
Posted by Crazy in Kuwait