"Too handsome" UAE guy kicked out of KSA Revealed! 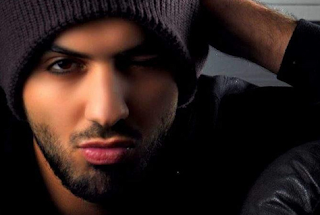 Dubai fashion photographer and actor Omar Borkan Al Gala has been revealed as one of three Emirati men deported from Saudi Arabia this month for being deemed too handsome.

The men were ejected from a festival in the conservative Gulf kingdom as authorities feared women could become attracted to them, it was reported.

According to Arabic language Elaph newspaper, the UAE nationals were taking part in a heritage event in the capital Riyadh when they were thrown out by Saudi’s religious police.

Saudi Arabia, a strictly conservative Sunni Muslim society, prohibits women from interacting with unrelated males.
“A festival official said the three Emiratis were taken out on the grounds they are too handsome and that the Commission members feared female visitors could fall for them,” the newspaper said.

What a coincidence considering his pic is the same one I happened to use for my previous post, I am amazing, lol!

If you like what you see you can visit his Facebook page.
Posted by Crazy in Kuwait