No poor in Kuwait - What rich people Think 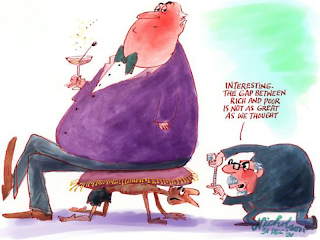 Google
There are no poor in Kuwait!


When some senior official appears on TV stating that there are no poor people in Kuwait, he is right, but this is only because he does not know the real misery of 90 percent of citizens. His Excellency talks out of his own experiences and the acquaintances he mingles with in lofty diwaniyas where people usually talk about purchasing a house for a million dinars or spending a quarter million on restoring another. They talk about spending millions as if they were talking about buying a KFC meal! This is why I don’t blame him for thinking that there are no poor in Kuwait.
The luxurious marble-clad diwaniyas he visits give him such an impression and he does not realize that round 500,000 citizens live in rented houses and that over 106,000 people have applied for a government-provided house and are still waiting. Yes, indeed. Salaries are high but, on the other hand, there is hardly a citizen who still has a single dinar by the 15th of each month.
This is not because he is an extravagant spender, it is rather because of the high cost of rents, installments and soaring prices right under the government’s nose and with its consensus. Our currency is only high in local markets and accordingly, all prices of foodstuff, medicine, private hospital bills and clothes have gone mad because in Kuwait, a trader can double or triple the price of his goods without accountability! On the 21st of the month in an oil-rich country, one can see citizens at gas stations to buy petrol for only two or three dinars, yet some people still say that there are no poor in Kuwait while others justify crowds at gas stations on the low price of petrol.
Some people argue that Kuwaitis travel four times annually, forgetting that those are only the better off ones whereas the underprivileged strives and makes lots of calculations before deciding to take his kids to the cinema, dine out or take such a recreational adventure! Your Highness the PM, if you and your Cabinet wish to know the truth about how the real 90 percent of your citizens live, ask each minster to live for five days with a Kuwaiti family and you will know where the problem lies and you will know the names of those robbing us in the name of free trade!
Yes, our country is very rich and we have a declared surplus of KD 13 billion, but 90 percent of us are not that rich. In fact we are experiencing intentional poverty on the last fifteen days of each month! The bottom line is, if you own a million dinars or more, please stop talking about poverty in Kuwait! – Al- Anbaa By Thaar Al-Rasheedi  link

It's about time someone spoke the truth! In reality a high percentage of these people put themselves in debt for stupid reasons, like trying to impress other people by buying expensive cars or using all of their money for crap they can't  afford, I know a few of those types. Unfortunately in Kuwait there is a disease called "affluenza" and just about everyone has it. Their goal in life is to "keep up with the Joneses" instead of living on what they make.

The real cases of "poor" Kuwaitis are those who can barely make it in life. They live day to day and try to make sure there's food on the table. The "cradle to grave" ideology has ruined what people think about them. If you told an expat he's making a better living than a Kuwaiti he would argue that point, but it's true, most landlords refuse to rent to Kuwaiti citizens and only want expats. Does the Ministry know that? Do they care?

The rich who run the place know nothing about struggle, most of them care about the next open air market location so they can get thos 5 KD cupcakes while some wish they had 5 KD for gas. They live in the rich people world and know nothing about government hospitals, not having money to pay the bills or hoping no emergency comes up that they can't cover. I guess the rich didn't read the article about the homeless Kuwaiti man who lived under a tree. That's my two cents.
Posted by Crazy in Kuwait